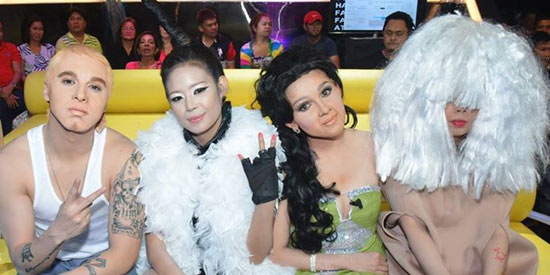 Sam Concepcion, Myrtle Sarrosa, KZ Tandingan and Kakai Bautista were the first performers in the pilot episode of Your Face Sounds Familiar Season 2.

Gary Valenciano, Jed Madela, and Sharon Cuneta are back as the show’s judges.

Melai Cantiveros, the first winner of YFSF, surprised everyone when she appeared as the 1990s cone-bra-wearing Madonna while singing the pop hit song "Papa Don’t Preach."

Host Billy Crawford announced that Melai will be part of the show’s entire second season run.

The first contestant on stage was Sam Concepcion. He revealed, “Alam ko mag-eenjoy ako dito sa show na 'to,” while he was rehearsing with Teacher Annie and Teacher Georcelle. The icon he impersonated was American rapper Eminem.

Appearing as a blonde skinhead with heavy makeup and "tattoos" on his arms, Sam did look like the controversial rapper in the music video “The Real Slim Shady.”

The Kapamilya actor spewed out rap lyrics that made Sharon Cuneta exclaim, “Hindi ko nakita at all si Sam. [It was a] wonderful performance.”

The second contender was cosplayer and Star Magic Angel member Myrtle Sarrosa. Her task was to sing and dance as Kpop star Sandara Park.

The former Pinoy Big Brother housemate sang the original Korean lyrics of the 2NE1 song “Fire.” Her hair was rolled up high like a tube and she wore a white feather vest similar to the outfit worn by Sandara in the music video.

The winner of X Factor Philippines sang “Pangako Sa 'Yo.”

It turned out that Vina herself was at the studio that day. Vina and KZ performed "Pangako Sa 'Yo" again. Sam and Melai imitated Daniel carrying Kathryn but he almost got poked by the cone bra of the Madonna impersonator.ï¿½

The last performance of the night was from “Dental Diva” Kakai Bautista. Her assignment was to impersonate the singer Sia.

Kakai came out wearing a platinum blonde wig that covered her face – except her mouth. She then sang Sia’s chart-topping hit “Chandelier.”

PEPsters, what can you say about the first four impersonations done on Your Face Sounds Familiar pilot episode? Share your thoughts in the comments section below.