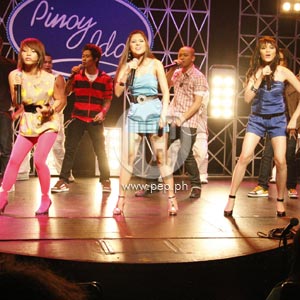 The Pinoy Idol Top 12 will have their gala performance this Saturday, June 22, at the Centerstage of SM Mall of Asia. (Above) Sue Ellen, Warren Antig, Jayann Bautista, Ram Chaves, and Mae Flores took part in a press conference that doubled as a mini-concert last June 18.


Last June 18, family members and fans of the Pinoy Idol Top 12 lined up at the Music Museum to see their favorite Idol contestant perform for a press conference that doubled as a mini-concert. The opening number, however, was marred by technical and wardrobe problems.


When the male and female Idol hopefuls sang Rihanna's hit "Don't Stop the Music," their microphones were not working but just like true professionals, they kept on performing even when the audience could not hear them sing. Halfway through their performance, the audio system started working and the audience was able at last to hear them sing "Irreplaceable."


After the group performances, each Idol hopeful was given his/her turn under the spotlight. Family members and fans of the Top 12 brought along their own banners and wore a particular color for their bet. Supporters of Warren wore violet, Kid Camaya's fans opted for red outfits, and Jayann's friends brought along white balloons.

According to Ms. Fotini Paraskakis, director of Production (Fremantle Asia), the Philippines is one of their key markets. "It's going well so far. The next stage, the gala stage, is going to be the most important stage so far. We're trying to make it as big a show as possible in the Philippines. For us, the Philippines has always been in our market because Filipinos singers are very strong and very, very talented. That's why we would like to see the Idol franchise develop here in the Philippines."


How would she compare GMA-7's Pinoy Idol with ABC-5's Philippine Idol?


Will the Pinoy Idol winner be able to join Asian Idol this year?

"There won't be an Asian Idol this year. It will probably be in 2009 because it's quite difficult for us to organize countries here in Asia. It takes a very long time and we want to make sure that we get the best songs, the best talents. It's a real celebration of music and we want to bring Asia together and that takes time to organize."


Will the winner this year be able to join next year's Asian Idol?

"That's a strong possibility, yes," says Ms. Paraskakis. She handles the Idol franchises of the Philippines, India, Indonesia, Vietnam, Singapore, and Malaysia. They will soon have a Thailand edition as well.

The gala performance of Pinoy Idol will take place this Saturday, June 22, at the Centerstage of SM Mall of Asia. The performance night is shown every Saturday after Pinoy Records while elimination night will be shown Sundays after Kap's Amazing Stories. Meanwhile, Pinoy Idol Extra, hosted by Rhian Ramos and Karylle, airs every Sunday after S.O.P. and Monday to Thursday after Babangon Ako't Dudurugin Kita.
Read Next
Read More Stories About
GMA-7, Pinoy Idol, television
Post a Comment
Featured
Latest Stories
Trending in Summit Media Network