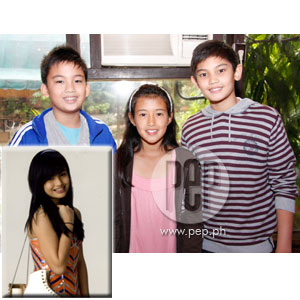 For its 4th season, Studio 23's Sports Kidz will feature the fun quartet of (left to right) Anton Asistio, Sara Castaneda, Javi Benitez and Katrice delos Reyes (inset). "Sports Kidz is an energetic show that features different kinds of sports that even the kids at heart will love," 13-year-old host Anton Asistio enthused during the show's press conference last August 2 held at the Annabel's restaurant in Quezon City.


Kids nowadays are getting less exercise. As the popularity of cable television and video games continue to rise dramatically over the years, teenagers and even adults prefer to be couch potatoes who live sedentary lives in front of the boob tube.

"We're dealing with an obesity epidemic," remarked pediatrician Dr. Philip Nader of the University of California at San Diego in a telephone interview with Reuters a few months back. But other than health issues, the lack of interest in physical activities also affect how individuals cope socially.

Given all of these concerns, the need for a program highlighting the importance of sports while at the same time encouraging young people to engage in physical activity is very much needed. And this is where Sports Kidz comes in.

"Sports Kidz is about us kids who want to share our sports to other kids," explained host Javi Benitez last August 2 at a press conference held at Annabel's restaurant in Quezon City.

Joining Javi during the special meet-and-greet was his co-hosts young cager Anton Asistio and newbie Sara Castaneda. Fellow host, 15-year-old Katrice delos Reyes was not able to attend as she is currently competing abroad in an ice skating competition.

These young kids turned TV hosts definitely know what they are talking about. Glancing at their respective profiles, one can definitely say that the quartet deserves to be at the forefront of a sports program.

Katrice is an ice skating champion who has competed in both local and international competitions. She has also graced various billboards and magazine spreads aside from doing two TV commercials in the past. 13-year-old Anton Asistio is considered as one of the future key players in local basketball. Currently playing as part of the vaunted Ateneo de Manila University junior team, Anton has played in the Small Basketeers of the Philippines (SBP) where they emerged as National Champions at the 2007-2008 season.

Young heartthrob Javi Benitez is more than just good looks as he is a decorated karting champion. He represented the country in various racing competitions held in Italy and Macau. Javi also netted the Philippine Junior Karter of the Year plum aside from bagging the Asian Formula 125 Open Juniors award of the 2007 Asian Karting Open Championship or AKOC.

Not to be outdone is new addition Sara Castaneda. Outwardly shy yet endearingly articulate, Sara won the Most Valuable Player award of the Makati Football School when she was only six years old. She went on to accumulate three more MVP awards in the Xavier Cup, Alaska Cup and the La Salle Football Fiesta. Sara's team won the ladies 14 and under division in the Costa Blanca Cup '08. She and her teammates will fly to Sweden to compete in the Gothia Cup '08 or more popularly known as the World Youth Cup.

FUN AND ENTERTAINING. For its new season, Sports Kidz will feature exciting segments like "Schooled" where viewers can learn the basics of various sports as delivered by esteemed sports personalities. There is also "Out of Bounds" where kids are informed about new updates in the world of sports. Sports trivia dished in a funky way abound in "What A Fact." The show also pays homage to traditional Pinoy games such as siyato, patintero and others through a segment wittingly dubbed "Old School." Latest updates on Pinoy sports legends will also be featured to keep old and young fans alike updated.

"All The Right Moves" is an instructional feature on various sports that will educate viewers on how to avoid accidents and other injuries while playing. "MVP" highlights students who inspire others to succeed in their chosen sport. Upping the ante this season, Sports Kidz introduces "Tekkie Muna," a segment that touches different technological breakthroughs in sportswear, apparel, shoes, gadgets and latest inventions and discoveries in sports.

The three hosts animatedly mentioned how the show likewise introduced them to other sports outside their usual ones.

"And that's what we also intend to do," said Anton, "to exposed fellow kids to other sports, hoping that they would be able to discover what they want to engage in."