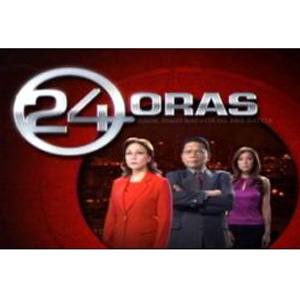 The news anchors of 24 Oras and Saksi will have new sets that boast of LED technology and three holodisplays, equipped with high-resolution projectors.

Dynamic and groundbreaking, the bold, new set design is one of the latest broadcast innovations that GMA-7 introduced for Philippine viewers. It will be the first news set in the country to use LED technology, previously seen in the newscasts of giant television networks CBS and NBC in the United States.

And if the current news set introduced holodisplay projection technology to Philippine television, the new, multi-million peso set will feature not just one but three holodisplays, equipped with high-resolution projectors.

The goal was to create a state-of-the-art news set that is considered the first of its kind in the Philippines. To make this a reality, most of the equipment for the set had to be sourced abroad.

Both classy and out-of-the-box, the new set defies the standard look of current Philippine news programs, with differently-oriented plasma displays, color-shifting lights, and various textures such as wood, metal, fabric and glass.

The new GMA News set is a fusion of different ideas and concepts inspired by the look of various news organizations all over the world, and took months of brainstorming with GMA SVP for News and Public Affairs Marissa Flores, GMA VP for News Programs Jessica Soho, Program Managers John Manalastas (24 Oras) and Michelle Seva (Saksi) and production consultant Sheila Pascual Paras. The lighting design is by award-winning cinematographer and VP for Post Production Ding Achacoso.

Their look may be new, but their mantra remains—Walang Kinikilingan, Walang Pinoprotektahan, Serbisyong Totoo Lamang.