Rhian Ramos looks back at her showbiz roots 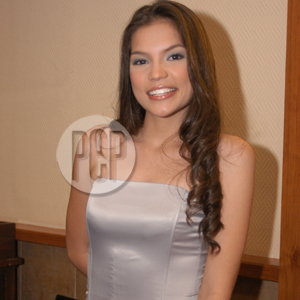 At first, this 16-year-old British-Filipina was hesitant to join the showbiz industry. Now, Rhian Ramos is excited to work with Richard Gutierrez in the GMA-7 series Lupin.

While GMA Films and Regal Entertainment's The Promise has made Richard Gutierrez and Angel Locsin certified box-office stars, another star has benefited from the movie's above-average performance at the tills. The public, or more specifically the male population, is also taking notice of Rhian Denise Ramos. While this girl has already made waves in the television show Captain Barbell (where she also worked with Richard) her screen presence in The Promise will cement her status as one of showbiz's hottest girl bagets.

McDo GIRL. Rhian first appeared on television for a McDonald's commercial, where she played the girl-next-door who catches the eye of a male hottie while buying a decadent cup of sundae. The people of GMA-7, who were on the lookout for a leading lady in Captain Barbell, took notice of the 16-year-old British-Filipina beauty. The McDo girl it turns out, is the niece of the head of GMA Artist Center, Ida Henares. It was Ida who called up Rhian. Recalls Rhian: "She called me up and asked me to audition for Captain Barbell I was like ‘No.'" Then she says, laughing, "And they called my mom and my mom was like, ‘Okay'!"

Says Rhian of her initial rejection of showbiz: "I really didn't want to do it. Kasi I was happy na e with my school. Kasi [when I was] younger, I had trouble finding a school because I've always wanted to go to La Salle. And then when finally my parents let me study in La Salle it turns out that I really, really loved it. I didn't want to leave school.

But Rhian's mom Clara convinced her to at least give it a shot. "My mom had a point. Kasi, you know, showbiz is a very iffy, butty world so they might not be interested in me then anymore. Kasithey were asking for me now. What if like two years from now di ba they're not interested? An opportunity like that doesn't come everyday where they call you up and say ‘Hey, wanna try out for Captain Barbell?'"

CHANGE OF HEART. Rhian found herself going to the auditions. But she only realized the seriousness of the role when she saw the top honchos of the network during the selection process. "I saw the director was there, the producers, some GMA executives. So, I was like, ‘Oh no, parang, I'm gonna waste all these people's time!' E, I hate that! I don't wanna waste people's time."

And change it did. Rhian got cast as Leah Lazaro in Captain Barbell and Monique in The Promise. She is currently working on the film Ouija, a horror film starring Jolina Magdangal and Judy Ann Santos.

She'll soon be reunited with Richard in GMA-7's animeserye Lupin. She's excited to be working with Richard, whom she considers one of her closest friends in the business. "I'm really thrilled to be doing it again with him. He's just really nice throughout the taping. He's energetic, he's makwento, he's funny."

Though she misses going to a regular school, she has no regrets about joining showbiz. She says, beaming, "It was a good move."