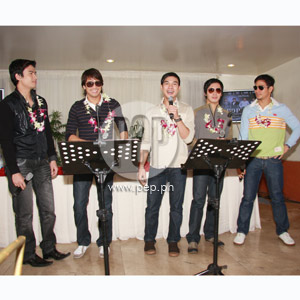 All of the Pop Icons except for Mark Bautista (middle) will be seen in the February 22 episode of The Singing Bee. TV hosts-singers (from left) Christian Bautista, Sam Milby, Erik Santos, and Piolo Pascual will be guesting on the February 22 episode of the missing lyrics show of ABS-CBN.
For those who will miss the grand concert of the Pop Icons this Saturday, February 21, you still have the chance to see the matinee idols-singers perform together as a group. The one-night concert of the ASAP hosts will take place at the Araneta Coliseum this Saturday.

Valentine's day isn't over in the Philippines because this Sunday (February 22), hunky Pop Icons Piolo Pascual, Sam Milby, and Christian Bautista will paint the town red with their ASAP '09 co-hosts on The Singing Bee.

Last on the list but definitely not the least talented are the Champions, composed of Rachelle Ann Go, Erik Santos, and Yeng Constantino.

Blood will not be thicker than water in this episode of The Singing Bee with every group from the ASAP family expected to give their all for the P2 million jackpot.

But before they get a chance to do so, the "Beauties" will first go against the "Beasts" in the Saturday (February 21) edition of Cesar Montano's popular missing lyrics game.

Ryan Eigenmann, Maricar de Mesa, and Nikki Bacolod, meanwhile, will summon their evil alter egos in Lobo and Dyosa as members of Team Contrabida. Jeffrey Tam, Hyubz Azarcon, and Gary Lim of Team Tawa, on the other hand, will try to prove that humor can lead them to a monster finish on the show.

Don't miss defending champion Side A's first title defense on The Singing Bee on Saturday (February 21), after Komiks Presents: Flash Bomba. See if the band can survive for another fight on Sunday (February 22), after Goin' Bulilit on ABS-CBN.