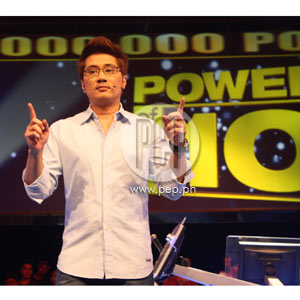 Janno Gibbs will host the GMA-7 game show Power of 10 starting today, May 10. It takes over the time slot of My Dad is Better than Your Dad.

Do you know what is the percentage of Filipinos who have a relative working abroad?

Would you know how many Filipinos say that they eat isaw (grilled chicken intestines)?

If your answer came near to the results of a survey conducted nationwide (89 percent for OFWs and 45 percent for those eating isaw), then you just might win P10 million in the game called Power of 10.

Hosted by Janno Gibbs, Power of 10 measures the power of Pinoys to predict the pulse of the masses. It also gives away the biggest cash prize among Philippine game shows to date.

"The Philippines is the 26th country to localize it," reveals Cecille De Guzman, program manager of Power of 10. "We're the third country in Asia to localize this show. The first one was India and the second was Vietnam. In fact, India is doing its second season already."

How do they determine the answers to their questions?


GAME MECHANICS. In the elimination round, two Power Players answer the five questions that can be culled from showbiz, current events. Pop culture and general information. The first person to gives the closest percentage or actual answer for three times will move on the jackpot round.

In the jackpot round, the contestant must answer the five questions to win P10 million. Every answer is worth an amount ten times higher than the previous prize.

For the pilot episode, viewers will have the chance to see Joey de Leon face Startalk co-host Lolit Solis. The next episodes will feature celebrity contestants so viewers can look forward to seeing John "Sweet" Lapus compete against BB Gandanghari. Iza Calzado and Sunshine Dizon will square off while love team partners Jolina Magdangal and Marvin Agustin will battle it out for the P10 million cash prize.

Power of 10 takes over the time slot of My Dad is Better than Your Dad starting today, May 10. This GMA-7 game show is expected to run for 26 weeks or two seasons.

Hosted by Janno Gibbs, Power of 10 airs every Sunday night on the Kapuso Network right after Kap's Amazing Stories.