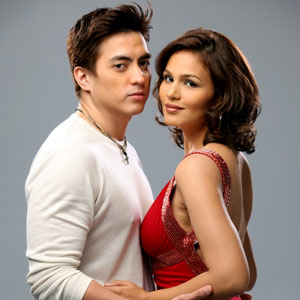 Iza Calzado lands the role of Clarissa Morales—the character given to life by the Diamond Star Maricel Soriano, in her 1984 breakthrough film, Kaya Kong Abutin ang Langit. The television remake of the movie will be shown starting September 28 as part of GMA-7's Dramarama sa Hapon.

Iza Calzado realized that the stakes were high as soon as she learned about the background of Kaya Kong Abutin ang Langit, the afternoon drama series entrusted to her by GMA-7.

Released in 1984 and directed by Maryo J. delos Reyes, Kaya Kong Abutin ang Langit was touted by critics as Maricel Soriano's launching vehicle as a serious actress after a string of films under the fantasy-comedy and light romance genre.

Kapuso Network executive Wilma Galvante, however, dismissed Iza's reservation. For Ma'am Galvante, Iza has earned enough stripes as an actress for her to merit the coveted lead part: "The role is right for her and we are glad that she along with Sunshine [Dizon for Tinik sa Dibdib] accepted it because it's a good project and we never doubted their talents to carry out the demands of the role."

DESIRE BEGETS GREED. Iza portrays the character of Clarissa Rosales, an impoverished social climber who will do everything to escape poverty no matter what.

Conquered by greed, Clarissa vows to become rich someday to alleviate the life of her mother Naty (Lani Mercado) and her sister Nancy (Angelica dela Cruz). The opportunity to be rich finally came when the employer of her deceased father, the Gardamonte couple, offered to extend a helping hand.

Clarissa successfully earns the trust and affection of the wealthy couple Ralph (Ricardo Cepeda) and Monina (Pinky Amador), treating her as one of their family members much to the objection of their only daughter, Therese (Isabel Oli).

Therese will make Clarissa's life difficult. Yet despite the ill treatment she receives from Therese, Clarissa will endure everything rather than lose the convenient life given to her by the Gardamonte couple.

Clarissa, however, wants more. Unfortunately, as Clarissa aims for a more convenient life to help her family, she ends up alienating them in the process and worse, losing her self identity.