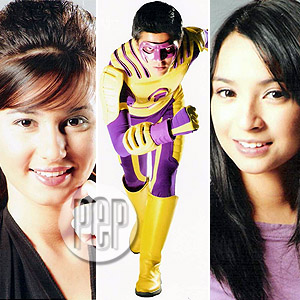 Mark Herras is Fantastic Man, the newest Pinoy crime-busting superhero on the small screen. This is his first solo project after being named as Ultimate StarStruck Survivor during the first season of the reality artista search. He is paired with Jackie Rice (left) and Ryza Cenon.

Originally created and portrayed by "Bossing" Vic Sotto, the movie-turned-series will star Bad Boy of the Dance Floor Mark Herras.

GMA-7 bought the rights to Vic's movie, which was developed as a follow up for his 2002 Metro Manila Film Fest (MMFF) entry, Mars Ravelo's Lastikman. Viva Films also made its own version of Lastikman, starring Mark Bautista and Sarah Geronimo, which became an entry for the 2004 MMFF.


Fantastic Man is Mark's first solo project, wherein he plays a Pinoy crime-busting superhero whose identity is concealed by his purple mask.

As a young boy, Fredo (Mark) lived happily in the province with his parents Danny (Ariel Rivera) and Linda (Beth Tamayo), together with his Lola Cedes (Gloria Sevilla), until his simple life was shattered when a group of armed bandits abducted his father and killed his mother. Fredo was raised alone by his Lola Cedes, who eventually turned senile and got lost when they moved to the city.

In search of his Lola Cedes in the cruel city, Fredo meets new friends but also has a close brush with death in the hands of a ruthless syndicate. Left almost lifeless from a deadly beating, Fredo is rescued by Prof. Manalo (Joey Marquez), a scientist who invented the healing machine called the Regenerator.

Fredo becomes the first "guinea pig" of the healing machine, which gives him super-human powers. This fateful experience transforms the once helpless Fredo into an invincible crime-buster with extraordinary abilities.

Fantastic Man faces a lot of cunning and cruel criminals, the most ruthless of whom is the mysterious and eerie Tadtad, the notorious syndicate leader whose face is heavily scarred and mutated. Other formidable villains are Paolo Contis as Madam Tisay, Benjie Paras as Gobo, Rez Cortez as Boss Elvis, Pen Medina as Singkit, and Keempee de Leon as Budol.