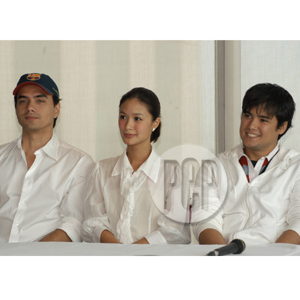 Heart Evangelista (center) plays the role of Carissa, a girl who looks like a monkey but is transformed into a beautiful lady by Dr. Hugo Roldan (TJ Trinidad, leftmost). Mendez (Geoff Eigenmann, rightmost) is a young man who is the only person to see the true beauty behind Carissa's "ugliness."

Heart Evangelista almost cried during the April 13 press con of ABS-CBN's latest teleserye, Hiram na Mukha. She was reminiscing about her rocky time with her parents and the press almost a year ago regarding her then newfound love, Jericho Rosales.

"It's really hard [shooting Hiram na Mukha]. I mean yung prosthetics...I do have my moments, ‘Hmm...gusto ko na matanggal [yung mask].' After what I've been through, I never really thought that I would be able to see myself on a [press release] card again. [Pauses to stop the tears from flowing.] Whew! Kaya medyo emotional pa ako," narrates Heart, who plays the lead character Carissa.

"Nung nawala ako...I really forgot why I wanted to become an artista. It's because I love acting. I love it. It's what I always wanted to do ever since I was in my mom's stomach. The moment I went out, ako na talaga yung tipong gusto ko na mag-artista. I'm trying my best to work as hard as I can, so they say that ‘It is worth giving her another chance.' I'm so thankful."

When PEP (Philippine Entertainment Portal) asked Heart if she has kissing scenes with Geoff in Hiram na Mukha, she said they are "suggested."

"Jino-joke nga nila [sa set] ‘Sige na, kiss na!' Eh hindi mo naman lips yan, e [because of the prosthetics]. Sabi ko ‘ayoko!' I understand, if you saw me at Panday, todo bigay ako sa kissing scenes ko dun. If you would think about it, why would you back out of a kissing scene now that you've done it before, but the thing is that I've made some mistakes and I would like to correct it."

Is that the reason why her parents got mad in the first place?

"I know it looks like we're being hypocrites, pero I guess it's more of...I'm trying to make things right. Sa TV, it's very hard to swallow. Kino-correct lang namin ang mga mali namin. It's not too late for that."

So are love scenes out of the question for now? "Oo naman."

The modern-day version of Hiram na Mukha follows the story of Carissa (Heart), a woman born with a face resembling a monkey. Because of her simian features, the only job Carissa can find is as a sideshow attraction in a perya (carnival), where she is abused and mistreated.

Finally finding a chance to escape, Carissa is nearly run over by the car driven by Dr. Hugo (TJ Trinidad), a renowned plastic and cosmetic surgeon, who was also at the time working on a new, revolutionary, surgical procedure. Also in the car is Alicia, Hugo's beloved wife, who, shortly after the incident, dies in a tragic car accident.

When Hugo and Carissa meet again, the simian-looking girl decides to become a test patient for the doctor's new procedure. Hugo, meanwhile, decides to mold Carissa's new features based on his dead wife.

But can Carissa truly be happy with a face—and a life—borrowed from a woman long dead? How will Hugo live with a woman who shares his wife's face? And what will happen to her relationship with Mendez (Geoff Eigenmann), a young man who was the only person to see the true beauty behind Carissa's "ugliness"?

Make sure you're part of the strange triangle of Carissa, Hugo, and Mendez in the new installment of Sineserye Presents: Hiram na Mukhastarting April 23, on ABS-CBN.