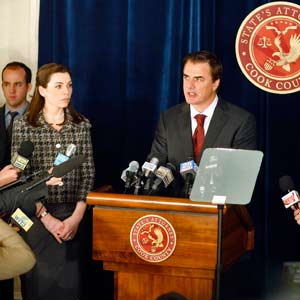 Julianna Margulies talks about her show The Good Wife, which earned for her the Best Performance by an Actress In A Television Series-Drama award in the Golden Globes.

Emmy Award winning actress Julianna Margulies has scored her first Golden Globe award for her outstanding performance in the new drama, The Good Wife, that airs every Thursday at 10 pm on the Hallmark Channel.

Margulies' winning role in The Good Wife is of a shamed wife and mother in the aftermath of a public sex scandal involving her husband (Chris Noth of Sex and the City). Here, Margulies compellingly portrays an embarrassed politician's scorned wife who pushes aside the betrayal and humiliation, and transforms herself into a resilient career woman to provide for her children.

The Good Wife, is Hollywood's latest breakout hit television series executive-produced by Tony and Ridley Scott, that premiered in the U.S. last September and arrived soon after in Asia on January 14, 2010, exclusively on Hallmark Channel.

Julianna Margulies about her role in The Good Wife:

What made you pick the role of Alicia Florrick?

For me, I loved how complicated the character is. This is a woman who's thought her life was going one way for many, many years and trusted that life and that world that she lived in. And then everything crumbles. So as an actor, I felt there were so many places to go. We're going to be able to peel her like an onion for years to come. The pilot had me from the beginning.


What is your take on your character?

I think Alicia's the kind of person who pretty much trusted her life, and when everything crumbles, it becomes the survival of the fittest really. It's not so much about being successful or being really good at her job, it's about getting food on the table, keeping a roof over her children's head and her own, and trying to face the world in a backdrop of humility.

Why do you think The Good Wife is getting such buzz?

I think what draws people in is ultimately that it is an old-fashioned drama in many ways and we haven't seen those in a long time. You get to dive into this woman's world and see the world from her perspective, which includes family and work and love and death and tragedy and happiness.

Why did you decide on The Good Wife after a hiatus from TV?

I've had a great ten years away from [the medical drama] ER. I've been able to do a lot of theatre and films and miniseries, and I've never stopped working. But what's different now is that I'm a mom and a wife and I need to stay in one place. And for me, television is the medium for women. The richest characters I can find are on television for where I'm at in my career. And it's a lovely entry back into a place where, to now being be a mom and be able to play this role from a very different point of view, I never would have known the things that I know now back then, and it's a different phase of life.

Why are men more prone to these kind of scandals? Why aren't women ever involved in the scandal?

Maybe this show will be on long enough Alicia starts having affairs. I think women are too busy. We're exhausted.