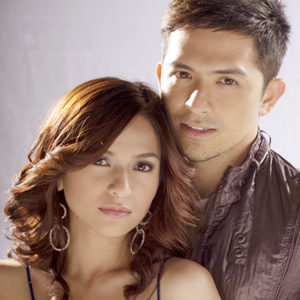 GMA Network, in line with the celebration of its 60th anniversary, presents another riveting afternoon series starting February 8. The TV adaptation of one of Lino Brocka's movie masterpieces—the award-winning filmGumapang Ka Sa Lusak.

The film Gumapang Ka sa Lusak was one of the most critically-acclaimed masterpieces in the '90s that reaped numerous awards including best director, best screenplay and best picture in various award-giving bodies such as Film Academy of the Philippines (FAP), Filipino Academy of Movie Arts and Sciences (FAMAS) and Gawad Urian. The movie was directed by the multi-awarded filmmaker Lino Brocka and created by Ricky Lee. More so, the film featured a powerhouse cast led by Dina Bonnevie, Christopher de Leon, Charo Santos and Eddie Garcia.

On today's TV-adaptation of this Brocka classic, the story revolves around the lives of engaged sweethearts Rachel (Jennylyn Mercado), an aspiring young actress, and Levi (Dennis Trillo), a poor, happy-go-lucky guy.

In the town of San Felipe, Rachel's beauty stands out. She is even the object of desire of all men including the chief of their town, Mayor Edmundo Guatlo (Al Tantay). With a fervent desire to have her, Mayor Guatlo will use all his power to make Rachel his mistress. Rachel rejects all the gifts and favors offered by the mayor. However, she will fall into the wicked mayor's trap after a series of misfortunes happen to her loved ones including her fiancé Levi, who gets imprisoned due to an illegal activity.

Although the mayor's wife, Rowena (Sandy Andolong), is aware of her husband's infidelity, she goes along with it as long as the affair doesn't affect her comfortable and powerful position in the society.

However, things will make a sudden turn when Mayor Guatlo's secret is exposed to the public. It will even unfold a series of revelations.

Will the mayor be able to win when he runs again for the mayoralty post in the coming election? Will the expose become Rachel's freedom from being the mayor's mistress? Will fate lead her back to the loving arms of Levi? Or is it too late for the hapless lovers to rekindle their affection?