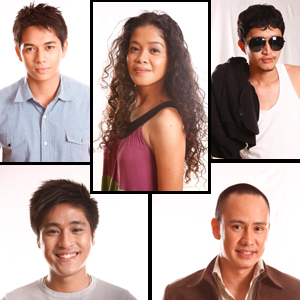 The cast is complete for the "Big Date at the Big Night" of Pinoy Big Brother Double Up. Housemates Melai, Jason, Tibo, Paul Jake and Johan will compete for the title of Big Winner on Saturday, February 13.

On their last week inside Pinoy Big Brother's house, the Big Five will undergo a series of Big Events that will help viewers determine the Big Winner of this season. Last Sunday's (February 7) "The Big Debate," gave a hint of what to expect this week.

During the debate, moderator Korina Sanchez threw hard questions to the housemates, like "Who has not been true to himself inside the house?" and "Who does not need to win in PBB?"

All five bravely answered these questions even if it meant possibly hurting their housemates' feelings.

Last Monday (Feb. 8), we also saw "The Big Divide," wherein the housemates were separated again in two houses. Tuesday's (Feb. 9) "The Big Reveal" will feature the shocking revelation of Big Brother to the housemates that all of them will advance to the Big Night.

On Wednesday (Feb. 10), the loved ones of the housemates will enter the house for "The Big Kapamilya Challenge." Here, each housemate will compete for a prize alongside their loved one.

Fans of the program should not miss "The Big High Five Concert" on Thursday (Feb. 11), where the Big Five will perform hits and requests from loyal PBB viewers. On Friday (Feb. 12), the housemates will have to face the biggest issues in their lives in and out of the house with Boy Abunda.

The voting for the Big Winner is still on. To vote via mobile just text BBS(space)name of Housemate and send to 2331 for Globe, Sun Cellular, TM and Bayan Wireless subscribers and 231 for Smart and Talk N' Text subscribers.

Join Mariel Rodriguez in Uber after Banana Split Daily Servings, Toni Gonzaga in PBB Double Up on Primetime Bida after Habang May Buhay, and Bianca Gonzalez in PBB Double Uplate after midnight.