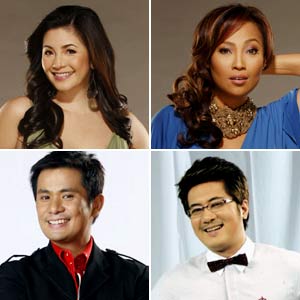 After 13 years of providing non-stop concert party on TV every weekend, the award-winning SOP will bid goodbye to its viewers this Sunday, February 28, with unforgettable performances from the country's top performers—Asia's Songbird Regine Velasquez, Ultimate Singer and Songwriter Ogie Alcasid, Queen of Soul Jaya, and King of Soul Janno Gibbs.

The final concert party will air live from GMA Network's Studio 7 with the country's best performers reminiscing their most applauded back-to-back presentations.

In addition, R & B Royalty Jay-R and Kyla will also deliver a remarkable production number.

Diva, a TV series topbilled by Regine Velasquez, will be launched as well. Her co-stars Mark Anthony Fernandez, Rufa Mae Quinto, TJ Trinidad, Glaiza de Castro, and Jaya in her first ever acting stint on TV, will be part of the segemnt.

Viewers should also not miss the final stint of the creative duo of Janno and Ogie in SOP's "Sobrang OJ!"

The GMA-7 musical variety show was also one of the finalists in the New York Festivals for TV Programming and Promotions category (1999, 2001, 2004 and 2007) and in the 2006 Asian TV Awards Musical Variety category.