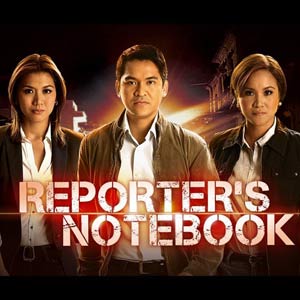 (From left) Rhea Santos, Jiggy Manicad and Maki Pulido will continue to deliver in-depth stories of national significance through their investigative show Reporter's Notebook, which is now on its 6th year on GMA-7.

The sixth anniversary special kicks off on September 7 with "Food Trail: Ang Malubak na Biyahe sa Presyo ng Pagkain" which finds Jiggy, Rhea and Maki tracing the complex and bumpy route that food takes: from the source, to the middlemen up to the stomach of every Pinoy. Why is it that the Philippines seems to be the only Asian country that has basic commodities with prices beyond the reach of the average citizen? What is the government doing to address this timely concern?

For "Backdoor Deportees," the sixth anniversary special which airs on September 14, Reporter's Notebook travels to Saudi Arabia to investigate the situation of Filipinos in The Kingdom. The team will take an intimate look at the illicit and dangerous situation of "distressed" Filipino workers who are forced to resort to the illegal and complicated practice of "backdoor deportation." These are Filipinos who, having experienced horrific forms of maltreatment and other unjust labor practices, are forced to become runaways. Stranded without necessary papers, they take temporary refuge while waiting for the day when they will be deported back to the country through the backdoor.

Since its inception in 2004, GMA News and Public Affairs' late night investigative news magazine program, Reporter's Notebook has been delivering in-depth stories of national significance. The show has been persistent in tackling different issues affecting good governance and accountability that affect the lives of Filipinos. By fulfilling this mandate, it has become one of the most internationally-awarded programs on Philippine television today. It has won several prestigious international and local awards including a Gold World Medal at the 2008 New York Festivals, Best Current Affairs Program at the 2007 Asian Television Awards, the Ani ng Dangal Award from the National Commission for Culture and the Arts (NCCA) as well as various citations from United States International Film and Video Festival, CASBAA/ABU UNICEF Child Rights Award and the Gawad Tanglaw.

As the program commences its sixth year, the producers promise to present a wider range of hard-hitting and relevant issues that viewers need to know and understand. Jiggy Manicad will continue to present dangerous stories of urban decay: from kidnapping and carjacking syndicates, to illicit sex trade, to rampant drug trafficking and other forms of organized crimes. Rhea Santos will face controversial personalities on the Reporter's Notebook hot seat with her upfront and no-nonsense manner of extracting the most-sought after answers. Maki Pulido, on the other hand, will focus on giving voice to the voiceless with her unique expertise of establishing genuine empathy with various subjects: from child laborers, to human trafficking, to other horrific forms of abuse of women and children.

Week after week, the trio aim to expose misdeeds and wrongdoings, and act as vanguard against corruption and negligence.