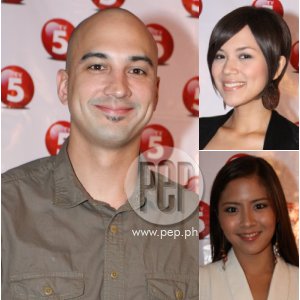 (Clockwise, from left) KC Montero, Abby Asistio, and Lia Cruz are the hosts of the new gadget and travel show in TV5, Tech Trip, which will premiere this October.

KC Montero is a self-confessed gadget freak. That's why he's happy that TV5 cast him in Tech Trip, a new show that focuses on the newest technology and the coolest places to visit.

Tech Trip will premiere on October and will be co-hosted by Lia Cruz and Abby Asistio.

"Tech Trip is a brand new show with me, Abby, Lia, on TV5," KC explained. "It's a travel show, it's also a gadget show. So we feature gadgets, also yung mga places we travel to."

KC said he has fun hanging out with his co-hosts. "Traveling is not really that great fun for me, but I like going out with these girls. Sometimes, the party is on the way. I just met these girls, so we're gonna have a good time."

The radio and TV host also explained his love for gadgets.

"Oh my gosh. Anything that comes out, I have," KC said. "How many iPods do have? I have the new Nano, I have the D5. No, I don't have the brand new square Nano, but I know everything. I'm getting the iPad, I have three Macs. I used to have PCs but they're virus-friendly so I don't like those. I have a lot of these that I forget about, mga gadgets, but if I don't have them, I know about them."

KC said it's only natural for people to love gadgets. "It's technology, we need to be, we need to know what's going on with technology, and it's just that I've been liking gadgets."

Tech Trip will premiere on TV5 this October.