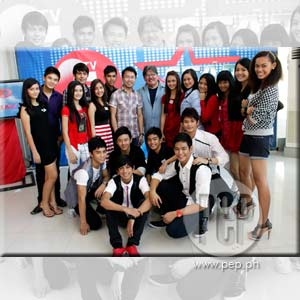 The 18 Star Hopefuls of Star Factor with director Al Quinn (wearing blue denim jacket) and Perci Intalan (standing, seventh from left). The Top 18 are composed of aspiring artists who ages range from 13 to 18 years old. One of them will win the P1 million cash prize, a TV5 management contract worth P1 million, and a 3-bedroom, 2-storey house and lot.

TV5 presented the 18 Star Hopefuls of Star Factor to the entertainment press last Saturday afternoon, September 18, at the KB Studios in Cainta, Rizal. One of them will bag the P1 million cash prize, a TV5 management contract worth P1 million, and a 3-bedroom, 2-storey house and lot.

The Star Hopefuls will go through a rigorous training period lasting 12 weeks that will test their desire to become the stars that they have always wanted to be. According to TV5, more than 2000 people auditioned for Star Factor, which resulted in 13 representatives from Metro Manila, 3 representatives from Cebu and 2 from Davao who made the cut.

The artista search is handled by TV5 Head of Creative and Entertainment Production Perci Intalan, who also oversaw the Philippine Idol search when the station was known as ABC-5 way back in 2006. They also flew in renowned director Al Quinn, who's now based in the United States, to helm the show.

The 18 young Star Hopefuls, who will need to survive the challenges that will hone their talents and sharpen their star potential, come from differing sectors of society.

THE BOYS. Fifteen-year old Kyru Sri relocated to Davao City 18 months ago because his parents wanted him to learn Filipino values. He previously lived in Gainesville, Florida for six years.

John Uy thought that he would be teased at by his classmates at Xavier School, an exclusive all-boys school, but some of them even wanted to know about the second round of auditions so that they could also join the said artista search.

Christian Samson was a second year Dentistry student from Centro Escolar University-Malolos before he auditioned for Star Factor.

Youngest among the boys, Rico dela Paz exudes a certain confidence and charm that is unusually seen in guys like him.

Miguel Estenzo could only shrug his shoulders when asked how it felt being the oldest among the Star Hopefuls at 18-years old. He is a Civil Engineering senior at Rizal Technological University.

Kevin Francisco had to stop his studies at the Far Eastern University, where he is a Hotel and Restaurant Management major, because his family lacked financial resources for his studies.

Clint Gabo took the chance to go to the Cebu auditions even if it meant travelling a long way from Misamis Occidental.

Mav Lozano is a student at the College of Music Extension Program where he is studying to become a classical guitarist.

Paul Montecillo meanwhile credits being an extra in another artista search last year in boosting his confidence to join Star Factor.

THE GIRLS. Eula Caballero's bedimpled smile, her height and similarities to Angelica dela Cruz make her stand out easily from the group. She hails from Boljoon, Cebu.

Another tall girl among the girls is Ritz Alzul who comes from Sta. Rita, Pampanga. She is a college freshman from Lyceum Manila, majoring in Accountancy.

Pretty doesn't just describe the beauty of 15-year old Gail Garcia, who is a high school junior from Quezon City.

One of the youngest among the girls, Jazz Ocampo's mestiza features can be credited to her mom, who is a Filipino-Spanish woman, and her dad who is a Filipino-American. Jazz is 13 years old and lives in Las Piñas.

Another one of the youngest girls, Claire Ruiz is a high school freshman from Westfields International School in Angeles, Pampanga where she is based.

Christine Serrano is from Caloocan City and studies at the Mystical Rose school in the same city.

Catch the 18 Star Hopefuls on Star Factor every Sunday at 5:30pm on TV5.