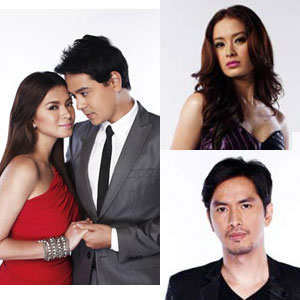 Remember when a poster for Takipsilim—supposedly the Philippine adaptation of American vampire saga Twilight—began circulating online? It looked legitimate to some that word about the local Twilight version spread like wildfire, even reaching international gossip site www.perezhilton.com.


The poster, featuring Shaina Magdayao and Rayver Cruz as the Filipino teenager Bella Swan and the vampire Edward Cullen, respectively, was later on proven to be just a fan-made artwork. However, it was so believable that ABS-CBN needed to release a statement that, no, they were not producing a local version of the Stephenie Meyer book and movie series. (CLICK HERE to read related article)

Takipsilim may have been just be a figment of imagination, but the stir it caused among the Twilight fans was real. Most of them were aghast that a local network would even attempt to touch the franchise. Yes, the Twilight saga has created such a strong and loyal following, not just in the Philippines but worldwide, that it caused a global resurgence of fascination with the vampire myth.

And so Takipsilim was eventually discarded and forgotten. But in 2010, promos for a new ABS-CBN soap began appearing on air and online. This show, with the much publicized pairing of Kapamilya stars John Lloyd Cruz and Angel Locsin, is Imortal. The message is clear: Imortal will be about vampires versus werewolves. And once again, fans and critics were quick to jump at the show and dismiss it as just another Twilight rip-off.

We watched the first two episodes of Imortal which premiered last Monday, October 4. And with what we've seen so far, there is no denying that it is influenced by the global vampire hit.

Imortal is basically a sequel to the Piolo Pascual-Angel Locsin starrer Lobo, but now, vampires will play a major role in the storyline as they have come back from hiding after ages. Although they set foot in the country as early as Ferdinand Magellan's century, they were driven into hiding because werewolves are killing their kind to defend the human race, the vampires' source of sustenance.


But now, the vampires feel braver and more empowered because of a prophecy that the chosen one, their sort of savior has been born to redeem their bloodline called the Sangre. And from the promo plugs we've seen, we can deduce that the vampire messiah is John Lloyd who will fall in love with the character of Angel Locsin, who is also the chosen one for the bloodline of the Waya (werewolves).

Imortal seems to be rebooting the Filipino's perception of vampires, which is closer to the folkloric image of the 'Aswang.' In Imortal, the first family of vampires who came to the country is obviously from a different culture, probably European, closer to those portrayed in the Twilight series—attractive, well-dressed, and of course, very pale but with reddish brooding eyes.

And of course, there's the whole vampires versus werewolves deal, which essentially is Twilight in a nutshell. This is the reason there's Team Edward and Team Jacob (in this case, viewers can even choose which side they're on, whether Waya the lobos or Sangre the bampiras).

So far, the comparison seems to end there. To be fair, the vampire mythology is universal and not owned by one author. It is unfair to say that Imortal is a total Twilight copycat, as if Twilight is the origin of all vampire literature. In 1994, we already had a movie called Vampira starring Maricel Soriano. It was also about a vampire falling in love with a man (Christopher de Leon) who turned out to be the last remaining scion of the vampire clan's mortal enemy. That movie's storyline is much closer to what Imortal is showing us today.

We give credit to Imortal for weaving the story with Angel Locsin's previous soap Lobo, so that it easily transitions into a logical sequel. The writing involved in this kind of narrative is tricky, but nevertheless, it enriches the whole story to form a new universe of interrelated characters and storylines, a technique that is both amazing and amusing especially when all questions are being answered and the story becomes more solid and well-developed (GMA-7 previously did this successfully with the mash-up of Mulawin and Encantadia).

Visually, Imortal does not disappoint. Set in different eras, from the 1500s, 1800s and set in modern times, it is satisfying to see details meticulously crafted for a made-for-TV production. The vampires also evolve in time, to stress the immortality of their characters, but we agree with observations that the face powder + red eyes and lips look is quite disturbing and a bit funny. There is, however, striking beauty in the contrast between the modern-day "siyudad" and the small village of vampires in the mountains, which keeps them from hurting humans and being hunted down by the werewolves.

And because Filipino soaps almost always start with the childhood stories of the lead characters, there are no sightings of the lead characters yet, save for Jomari Yllana and Jake Roxas who play the immortal vampires with opposing views. Jake Roxas's Magnus wants to keep fighting the Lobos for the vampires' redemption but Yllana's Roman wants to peacefully coexist with both humans and werewolves by proving that they can survive by sucking on animal blood.

Angel Locsin also appears early on as her Lobo character Lyka Ortega, who gave birth to Lia (her character in this series that she will also portray). John Lloyd Cruz will portray an orphan named Matteo.

We can't wait to see how the story goes when the soap progresses into the two camps' present-day rivalry. Unlike previous Filipino bampira and aswang legends, this will be set in a city, amidst business districts and night spots, no longer in the small villages and jungles they inhabit.

Influenced or not by the Twilight saga, Imortal is an interesting and promising addition to our country's modern mythology. The show just has to be careful not to mimic Twilight entirely, as it can only result in the series looking like a cheap knock-off. So far, Imortal seems to be on the right track. Yes, it is a vampire and werewolves legend but it blends the universal myth with Filipino culture and folklore.