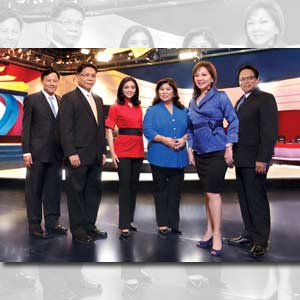 "'We are responding to viewers' requests for timely news updates in Filipino and for public affairs shows at earlier timeslots with this groundbreaking news channel,' says News TV Head Nessa Valdellon.

"In addition, Sheila Coronel of Columbia University, Newsbreak's Marites Vitug and Ed Lingao of PCIJ will be joining the channel as advisers for the investigative documentaries.

"'For the first time, the country's most awarded documentarists will be anchoring newscasts. News TV's primetime newscast State of the Nation will be hosted by Peabody winner Jessica Soho.

"News TV's morning newscast will be led by GMA News Online Editor-in-Chief Howie Severino and another Peabody winner Kara David. Their shows will be in-depth, something to really look forward to," adds Valdellon.

"At a time of the 24/7 news cycle and new media, GMA News TV steps up to the challenge of delivering worthwhile content—credible and relevant news and information. Deploying its resources to help people become more socially aware, to provide viewers with the knowledge that may perhaps effect change in their lives, families, and communities.