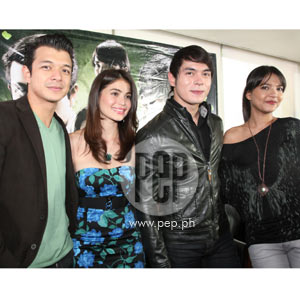 (From left) Jericho Rosales, Anne Curtis, Jake Cuenca and Alessandra de Rossi are cast in the local adaptation of Green Rose. ABS-CBN will remain faithful in its depiction of this Koreanovela about a man who tries desperately to clear his name after being framed and accused of a crime that he did not commit.

Jericho will bring life to the character of Jerome Delgado, a man who is accused of attempting to kill a rich businessman. He will do everything to protect his name. "Maganda yung papel ko dito. I can say na this is one of my favorite projects," Jericho shared.


His last teleserye with ABS-CBN, Dahil May Isang Ikaw, where he starred opposite Kristine Hermosa has been nominated in the newly established Telenovela category of the 54th New York Festivals TV & Film Awards.

Meanwhile, Anne, whose last TV series was The Wedding back in 2009, is now very excited to play the role of Angela Tuazon, the heiress of a huge company who will fall in love with Jerome Delgado. "Namiss ko maging part ng teleserye talaga. Kaya now that I'm given the chance again, I will definitely do my best," Anne said.

Jericho and Anne were paired in the 2008 film Baler where Anne was nominated three times in separate award-giving bodies for the Best Actress category. On the other hand, Jericho won two Best Actor awards for his portrayal of a soldier in the said movie.

Jake, who was part of ABS-CBN's remake of the Mexicanovela Rubi, is also ecstatic about his new show. "Ever since we started taping for Green Rose, excited na ko na umere yung series dahil, walang bola po, ang ganda ng kwento. Kahit pa part ako ng cast, gusto ko rin mapanood sa primetime ito," Jake said. He is cast as Edward Fuentabella, a man who's aggressive in achieving his goals even if it means betraying the people who have trusted him.

Alessandra will also be playing a vital part in the series as she portrays the character of Geena Rallos, the woman who's willing to do anything for the love of Edward. Alessandra was last seen in Wansapanataym's Cara.