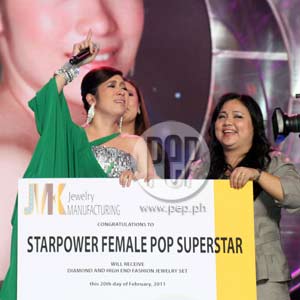 Angeline Quinto, dubbed as The Pop Belter of Manila, emerged as the winner Star Power with her score of 90.88%.

These five lovely ladies are oozing with "star power." And all of them deserved to be in the final five of Star Power: Sharon's Search for the Next Female Pop Superstar.


Angeline Quinto, dubbed as The Pop Belter of Manila, emerged as the winner of the talent search hosted by Sharon Cuneta.


She took home a diamond jewelry set, a Sony entertainment showcase, an SUV, an exclusive recording contract with Star Records, a contract with ASAP Rocks and a cool cash prize of 1 million pesos.

Glamorously dolled up from top to toe, the Megastar and the five contenders opened the show with the upbeat number, "When I Grow Up," amidst a stylized starry stage.

Hosts Christian Bautista and Eric Santos, both looking very dapper in their suits, explained the mechanics of the competition. There were three levels in the competition: Personal Song Choice, Judges' Choice and ABS-CBN Management Score. One finalist would be eliminated in each level.

The final score would come from these sources: text and online votes and the judges' votes.

The "Personal Song Choice" was the first level in the competition. First to perform was the Sweet Song Siren of Cebu, Akiko Solon, who wore a red and silver outfit. Judge Billy Crawford observed, "Your progress has been amazing...."

Angeline Quinto, the Pop Belter of Manila, performed next with the song "What Kind of Fool Am I?"

"Listen" by Beyonce was the song choice of K-La Rivera, who is dubbed as the R&B Sweetheart of Canada. Clad in a fuchsia pink gown, the Canadian lass sang the song with gusto. Judge Mitch Valdez had this to say "To my surprise, you are constantly good..."

Fourth performer Krissel Valdez, the Soulful Diva from Davao, was next to conquer the stage. "Vocally powerful," judge Billy remarked.

The next level was the "Judges' Choice" round. The judges assigned songs that they believe would be best interpreted by the four remaining finalists. Monica was given the task of singing "Make it Through the Rain" while Angeline was asked to sing "I Don't Wanna Miss a Thing." Angeline won the judges over with her performance.

Krissel sang the song "Someday "with tender passion while "It Might Be You" was the song interpreted by K-la. For Krissel's performance, Direk Bobot said: "Congrats. Napakagaling ng pagkakanta mo." Judge Billy was equally thrilled with K-la. "You sound great and you look beautiful tonight."

For this level, K-la from Canada was eliminated from the competition. She got a score of 83.45 %. Krissel, Monica and Angeline became the three finalists that moved on the next round called the Star Records Composition Showdown.

Gino Torres's composition titled "Higher" was interpreted by Krissel. Judge Mitch told Krissel, "You are an asset to the music industry."

At this point, another contender ended her journey in the competition. This time, Monica bade farewell and expressed her thanks to Sharon, the judges and her fans. She got a score of 85%.

With Monica eliminated, the winning title became a toss between Krissel and Angeline. Megastar Sharon made the final announcement, declaring Angeline as Star Power's first grand champion with her score of 90.88%. Angeline profusely thanked everybody as tears streamed down her face.

The three jurors—Mitch Valdez, Billy Crawford and Director Bobot Mortiz—contributed 30% of the total score while 40% came from text and online votes.