ABS-CBN primetime shows grab lead in Metro and Mega Manila, according to data from Kantar Media-TNS 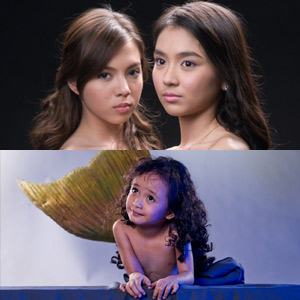 From February 1-15, ABS-CBN's soap opera Mara Clara (top frame) registered an average rating of 27.6% according to data from Kantar Media-TNS. The fantaserye, Mutya (bottom frame), was able to reach 23% among nationwide households.

"When it comes to TV shows on primetime, ABS-CBN's teleseryes remain the most popular among viewers nationwide, including Mega Manila where GMA used to lead in TV ratings.

"Kantar Media/TNS data for February 1 to 15 show that ABS-CBN's Mutya, Mara Clara, and Imortal consistently beat Dwarfina, Machete, and I Heart You Pare in Metro Manila, Mega Manila, and the entire country.

"Leadership in primetime television is important because television viewing is at its highest in the evening. February's figures would show that ABS-CBN had more viewers than any other TV network in across the country as it enjoyed a 40% audience share or nine points higher than GMA's 31%.

"In February, ABS-CBN has not only maintained its national leadership in TV ratings but it has wrestled the primetime TV leadership in Mega Manila from GMA.

"ABS-CBN shifted to Kantar Media/TNS after filing a case vs. AGB Nielsen Media Research for failing to comply with its request to investigate alleged cheating and data tampering in TV ratings. The case is still pending in court."