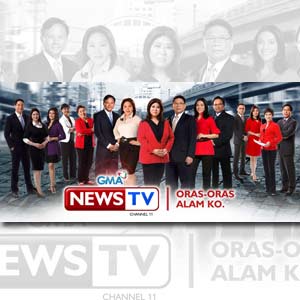 "For the past six months, the men and women of GMA News and Public Affairs have been busy working on an idea—that the country is ready for an all-news and documentary channel on free TV.

"That idea—and their effort—will come to fruition today, February 28, as GMA News TV goes on the air, providing the Filipino viewer with a compelling viewing alternative.

"'Importante sa amin na alam ninyo,' states GMA News TV's station ID. And the free to air news and public affairs channel—from the only broadcast news organization in the Philippines to have won the prestigious George Foster Peabody Award—stays true to that commitment by expanding the Kapuso brand ofserbisyong totoo.

"Jessica Soho, widely regarded as the country's most awarded broadcast journalist, anchors GMA News TV's flagship evening newscast, State of the Nation with Jessica Soho. She is also at the forefront of Brigada—from the highly successful 1990's program that launched the careers of many broadcast journalists—as mentor to today's generation of reporters.

"Arnold Clavio anchors Balita Pilipinas, which features the week's biggest headlines from Luzon, Visayas and Mindanao. Vicky Morales brings the audience Good News, a one of a kind newscast that celebrates positive news about the country. Mel Tiangco, in turn, hosts Powerhouse, a show that gives viewers a rare glimpse into the private lives of the country's most powerful individuals.

"Concerns, grievances and complaints against government agencies are addressed by the daily afternoon program On Call hosted by Ivan Mayrina and Connie Sison. On Call will provide on the spot assistance to those seeking help by helping them get in touch with the proper agency or authority.

Public affairs programs - and more! -from morning to night

"'It' girl Solenn Heussaff empowers viewers with Fashbook, a makeover show that also focuses on inner beauty. Weekend Getaway, hosted by Drew Arellano, is a reality-travel show for real weekend warriors. Game!, hosted by Chino Trinidad, is the ultimate source of information on Pinoy sports. Daily showbiz newscast In The Limelight, with Rhian Ramos, offers more than just showbiz gossip.

"The mock newscast makes a triumphant—and wacky!—return to television with (May) Tamang Balita, hosted by comedian and Internet sensation Ramon Bautista. All Sports, the Sunday sports event program, features the most exciting lineup of both current and classic sporting events.

"Pinoy rock icon Pepe Smith, with his equally engaging children, rock the house on the reality program The Smiths. Providing cinematic and family-friendly documentaries every weekend are Front Row and Reel Time.

"With its newscasts, public affairs programs, and out of the box offerings, GMA News TV is about to prove that the Filipino audience is ready for truly alternative programming."