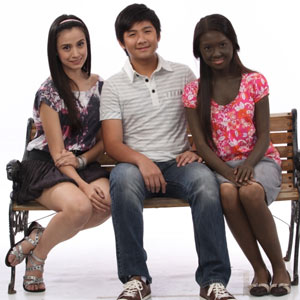 The debate is centuries-old and controversial not just here in the Philippines but the world over. Is the word "negro" derogatory? How about its derivatives? Does calling someone negro or negrito make one racist?

In many countries where racial discrimination has become an intermittent issue, the word is considered derogatory. In the U.S., for example, progressives never use "the N word" that has its roots in the age of slavery. "Black" has been the preferred word for some, while others opine that "African-American" is more acceptable.

In fact, the world is slowly moving away from using oppressive labels for people who are not white. The media, although it has its flaws, has significantly contributed to making people more sensitive to people who look "different" and supposedly don't fit in accepted society.

But here comes GMA-7's afternoon soap titled Nita Negrita, which has caused quite a stir. "Ang teledramang babago sa hapon," goes the plug. What's new about it? Certainly not "Okay, sit back and enjoy another tearjerker."

In fact, some people were shocked and they attacked the show even before it was aired. With a title like that, it's blatantly racist, they said. It doesn't help that the role of Nita is being played by a fair-skinned tween actress whose entire body and face require black makeup. Ridiculous!


A Facebook page is even titled "Nita Negrita is a Racist Show" with a statement saying: "We have nothing against teen actress Barbie Forteza. We don't HATE her. We DISLIKE the concept of the show Nita Negrita–it brings on the "HATE" and discrimination towards dark-skinned pinoys."

We watched the pilot episode plus some additional episodes days after, when the infant Nita grows up to be played by Barbie Forteza. The pilot focused on Nita's mother, Mirasol (Lotlot de Leon) who falls in love with an African-American called Edgar (Alvin Aguilar) while working as a waitress in a beer joint.

Mirasol's sister (Glenda Garcia) does not approve of the relationship, and here we notice the scriptwriter being very careful in treading this sensitive territory. The sister repeatedly says she does not like Edgar because he is poor (as opposed to what we expect, that it's because he is dark-skinned).

Thus, the "negrita" factor becomes completely irrelevant to the story. Edgar can be fair-skinned and poor and the reasoning about poverty would still be valid. In a pivotal scene that adds to the sister's prejudice, she calls Edgar "Egoy" in a fit of rage upon learning that Mirasol is pregnant with his child.

Apparently, even though the show suggests a legitimate issue (discrimination against dark-skinned persons, which actually happens in real life), it does not confront the question head-on. The show chooses to be cautious rather than bold and challenging. It leaves judgment to the viewers on whether, for instance, Mirasol's sister dislikes Edgar because he's black, and not just because he's poor.

Neither is the grown-up Nita's dark skin central to the story. Again, she can be white and her story will remain the same. She's a good-hearted orphan often bullied by Mean Girl Misty (Lexi Fernandez) not because she's dark but because she's liked by other people and she's probably more talented than Misty.

Nita herself does not wallow in self-pity or question the color of her skin. She appears perfectly fine with her color, confident in facing others and being nice to everybody. So, why does she have to be dark-skinned in the first place when it's not an issue to begin with?

It's like her being "negrita" is simply disregarded by all the other characters and they think her being a poor orphan is actually her real struggle. Yes, she was taunted "negrita" by the other girls in the orphanage when she was younger, but that was it. She never really had a problem with her color when she grew up, at least from the episodes we saw.

Nita's being a negrita is just an elephant in the room. It's obvious but no one seems to notice. And that makes the show even more questionable—is it really necessary for a fair-skinned young actress to endure black makeup, which takes hours to put on and wash off afterwards? Well, who knows, that elaborate make-0ver may be a forecast of a happy ending—Nita transforms into a pretty fair-complexioned heroine?

After all, we live in a whitening-lotion culture that's crazy about flawless white skin, which is equated with beauty. Ideas are formed, directly or indirectly, that being dark-skinned is something that must be fixed. Nita Negrita could really be excellent if it tackled discrimination with more sociological and psychological depth, rather than just melodrama and histrionics. And as we said, brandishing Negrita in the title chafed many viewers into thinking, "What? Name-calling is now okay?"

Having seen no major impact of Nita's racial roots in the course of the show, much of its controversy can be traced to preconceived notions and judgment. Ironically, ignoring the issue only underscores the reality of racial prejudice, even if unintended by the makers of the show.

We dare Nita Negrita to be useful to society. Use the TV program to oppose racial, ethnic, and other forms of discrimination. Be more courageous to address those who think dark skin is a no-no, even while ubiquitous skin-whitening commercials/print ads subtly counter the idea.

Furthermore, why would we then become sensitive about discrimination against the dark-skinned yet fail to notice other derogatory terms like Igorot, promdi, bisaya, bakla, abnormal, etc.?


And to those defending the show by saying it carries goodwill with the message, "Kahit maitim si Nita, mabait siya at magaling, etc.," the opening phrase is already a sign of judgment. Pushing our argument further, black or earth-brown happen to be the color of hard-working ordinary people; the masa, in other words, who watch telenovelas to forget their woes.

Discrimination in all forms takes place in many social and cultural situations. That's what has to be fixed. Not the skin color.