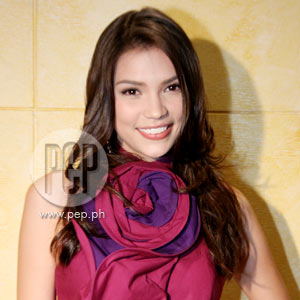 "I'm not really a host, I'm a reporter. I have a lot of friends kasi na kahit sila nagre-report ng showbiz news. So I study them. I see how they handle it. Not naman to ask for advice kasi we can't naman all have the same style, 'di ba? Pero it helps talaga a lot na kasama ko si Aubrey Carampel and Nelson Canlas kasi they have made a name for themselves in showbiz reporting," said Rhian Ramos about her GMA News TV program titled In the Limelight .

Actress-host Rhian Ramos feels that hosting a showbiz talk show has advantages for her rather than disadvantages.

Longtime entertainment reporters Nelso Canlas and Aubrey Carampel will join the Kapuso actress in delivering the latest showbiz happenings around the metro.

"It helps that I'm also in the business. Pero ayon na nga, I understand both sides. Minsan if I do a feature on someone that I know kailangan siyempre bilang reporter hihingi pa rin ako ng exclusive.

Being an entertainment anchor and reporter is not an easy job considering that In the Limelight was conceptualized as an "in-depth" showbiz newscast and not as a rumor-driven program.

Rhian is no stranger when it comes to being the subject of intrigue, whether it's about her personal or professional life. But the young actress stressed that she learned how to deal with reporters and news about her over the years.

Rhian expects the same now from her showbiz colleagues as she assumes a reporter role on television.

"Ako, personally, I have a lot of friends who are reporters and hosts and minsan nasasama din naman ako sa mga kuwento nila. Hindi naman ako nagagalit kasi alam ko trabaho nila 'yon. At kung hindi naman sila ang mag-report, someone else is gonna talk about it because that's the world I'm in," Rhian pointed out.

"I'm hoping the same from my friends."