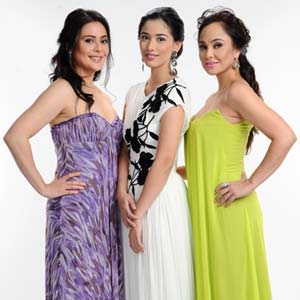 (L-R) Dawn Zulueta, Lauren Young and Eula Valdes bring life to the characters of Magda, Via and Selina, respectively, for ABS-CBN's remake of Mula sa Puso. Helmed by Wenn Deramas, this teleserye will begin airing this Monday, March 28.

"The soap opera that gripped the nation in the late '90s returns on Philippine television as ABS-CBN revives Mula sa Puso with a powerhouse cast beginning Monday, March 28, at 6:00 PM as a new addition to its unbeatable Primetime Bida block.

"Filipinos will relive the teleserye launched 14 years ago that gave birth to some of the most unforgettable Philippine soap opera characters such as Magda (Dawn Zulueta), Fernando (Ariel Rivera), Selina (Eula Valdes), Gabriel (JM De Guzman), Michael (Enrique Gil), and Via (Lauren Young).

"Life will change for Olivia Pereira, the only daughter of Don Fernando Pereira, on her 18th birthday. Aside from learning that her dad promised her hand in marriage to her childhood friend Michael, she will also be abducted by armed men ordered by her very own aunt Selina.

"She will be saved by Gabriel, a simple guy and a taxi driver whom she will later fall in love with. Little did she know that she is close to discovering pieces of her past and of her identity as Gabriel's foster mom Magda turns out to be her biological mother.

"In this remake of Mula sa Puso under the helm of its original director Wenn V. Deramas, viewers will get to know the characters even more as the series further dissect every character and their stories like Fernando and Magda's past relationship.

"The whole cast has been preparing for their roles and they leaving no stones unturned in reviving the colorful and famous characters of the series.

"I watched the movie just to get a sense and feel of it, but I still want my portrayal to be fresh and different. I don't want it to be a carbon copy," said Lauren, who will reprise the role of Via first played by Claudine Barretto.

"You will definitely see a different Enrique here. Very different from the characters you usually see me play," said Enrique, who will play the role that Diether Ocampo portrayed.

"We are really giving our best so that we can at least be at par with what the first Mula sa Puso gave the viewers," said JM, who will play Gabriel, a role that marked the career of late actor Rico Yan.

"The series also marks the return of Dawn Zulueta, Eula Valdes, and Ariel Rivera on ABS-CBN.

"I feel at home again. I'm excited to work with old friends and colleagues again. I trust Direk Wenn. He will surely guide me on how to reprise the role of Selina," said Eula.

"My last teleserye in ABS-CBN was Lastikman. Then I got pregnant and gave birth. I am now back and I am honored that ABS-CBN chose me for the role of Magda," said Dawn.

"This is an emotional comeback for me," says Ariel, who was part of the original series and will take on a bigger role this time. "I am excited to be part of Mula sa Puso, which was a record-breaking soap."