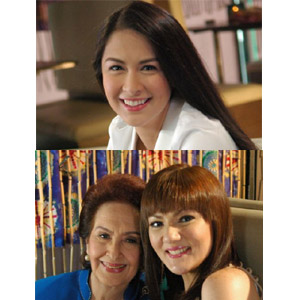 Marian Rivera (top frame), Gloria Romero and Carmina Villarroel are some of the GMA-7 stars who will appear in the "Halo-Halo Ang Summer Saya" summer TV commercial. It will be shown to the public for the first time this Sunday, March 27, on Party Pilipinas.

"Just as appetizing and thirst-quenching as the Filipino favorite refreshment halo-halo, GMA-7 serves a hodge-podge of new flavorful ingredients in its programming recipe, which will surely stimulate the viewers' varying 'tastebuds.'

"Primetime television's king of telefantasya Richard Gutierrez brings on the three-scoop ice cream with Captain Barbell. In the comeback of the greatest Pinoy hero on primetime this March 28, Richard reprises his role as Captain Barbell and his alter ego, Teng, and is now joined by a new league of extraordinary beings with unique superpowers.

"Brand new host Edu Manzano offers ice-cold peace to warring families in the refurbished Family Feud: The Showdown Edition, while Chris Tiu puts in some wiggly gelatin with his Man vs. Beast: a new program that will pit manly powers against animals'.

"The crazy tandem of Ali Sotto and radio disc jock Papa Jack add on the milk in Star Box, a daily talk show to be staged live not in studio glitz but in remote areas to engage the common-tao; while Jackie Rice dips in some pinipig in Sisid, with leading men Dominic Roco, Ian Batherson and JC Tiuseco. In her first afternoon drama starrer, Jackie learns the depth of showbiz stardom thru diving as the beautiful Hiyas in one island country.

"Meanwhile, Mark Herras, Kris Bernal and Rocco Nacino whip up their one-of-a-kind dance moves for television's most-awaited Danserye with the working title Jump, as Carmina Villarroel takes on the kitchen heat with kiddie chefs in Amazing Cooking Kids, a reality cooking competition open to kids from eight to 12 years old.


"Topping it all, Marian Rivera makes the perfect appetizer with her new horror-comedy flick Spooky Nights Presents Bampirella, the first of Spooky Nights presentations to run for four weeks. Bampirella tells of a vampire tale tweaked with love and curse.