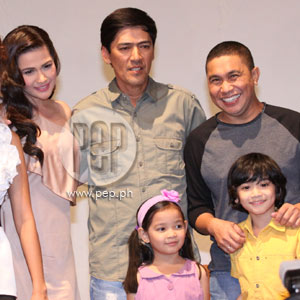 This was the declaration of Bea Alonzo during Eat Bulaga's Pinoy Henyo Celebrity Edition, aired yesterday, April 18. The Star Magic talent appeared on GMA-7's noontime show along with other Kapamilya stars Thou Reyes, Zaijian Jaranilla and Xyriel Manabat. They "crossed over" in order to promote their upcoming movie Pak! Pak! My Dr. Kwak! This comedy film is about an intern doctor and a "fake" healer who clash because of their different beliefs.

For the game Pinoy Henyo, one member is tasked to guess the term that is flashed on the device placed on his/her head. The person guessing should only ask questions that are answerable by yes, no or puwede (could be). The pair that is able to guess correctly in the shortest time wins the game.

Thou Reyes and Wally Bayola were the first pair to play. Wally was the one guessing while Thou was the one who answered "Oo, Hindi o Puwede." The twosome did well since Thou was able to guess the term "hair" within 49 seconds.

Child wonders Zaijan Jaranilla and Xyriel Manabat followed. Eat Bulaga! hosts Vic Sotto and Allan K were astonished as the duo, Zaijian and Xyriel, trounced the first pair with their time of 46 seconds. The kids were asked to guess a kutsara or spoon.

Bea Alonzo and Jose Manalo formed the last pair that competed. The easy rapport betwen the two was evident as they fooled around during the segment.

As it turned out, Bea and Jose were able to tie up with the first pair (Thou and Wally) since they guessed the word pakbet (a vegetable dish) within 49 seconds.

The P65,000 cash prize won by the Pak! Pak! My Dr. Kwak! stars in "Pinoy Henyo" will be donated to Silid-kaalaman, an Eat Bulaga! Library Project.