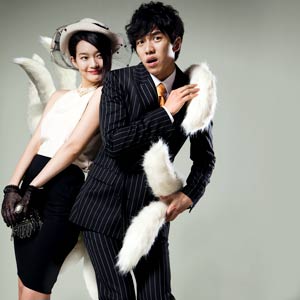 ABS-CBN will air the Koreanovela, My Girlfriend is a Gumiho, starting May 9. According to Korean legends, a Gumiho is a nine-tailed fox that takes the form of a beautiful woman to deceive men.

"These are only some of the words to describe a Gumiho. According to an ancient Korean urban legend, a Gumiho is a nine-tailed fox that takes the form of a beautiful woman and seduces men so that later on they can pull and eat the liver out of their fragile human bodies.

"For generations to generations, the legend of this mythical creature (or monster to some) has been passed on and has been feared upon but things, however, are different for aspiring action star Cha Dae Woong. After encountering and seeing a gumiho himself, he has proven that they not capable of taking your liver, rather they can take away your heart.

"Beginning Monday (May 9), get to see an different kind of love story between a human and a gumiho in ABS-CBN newest Koreanovela My Girlfriend is a Gumiho.

"After being cursed and being locked in a painting, Dae Woong accidentally frees Gu Mi Ho, a gumiho who wants nothing but to become a real, normal human being. The mere sight of the gumiho, who took its female form, rattled the young man, making him run for his life and falling off a riverbank. This will cause him severe damages and in order to save his life, Mi Ho gave her bead or source of power to him.

"In return, Miho asks Dae Woong to take care of her bead and be her boyfriend for 100 days. The young man has no choice but to agree but little did he know that Miho's true motive is for her to be a normal human being. Their bargain will later take its toll as the two are both unaware that after 100 days, Dae Woong's life must be sacrificed for the Miho to realize her dreams.

"How far can Mi Ho go in order to get what she's been wanting all her lifetime? Will Dae Woong love Miho even though she is a gumiho? Can they sacrifice everything for their love?

"Don't miss the exciting premiere of My Girlfriend is a Gumiho this Monday (May 9), 4:45 PM after Frijolito on ABS-CBN."