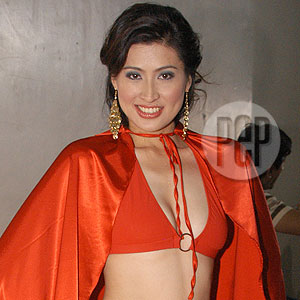 Gemma Gatdula joins past endorsers of the brand who rode high on the famous white horse of White Castle whisky. The 24-year-old native of San Fernando, Pampanga, wins a one-year endorsement contract with Distilleria Limtuaco, makers of the White Castle, and lands a contract with ABS-CBN Talent Center, among other prizes.

The 24-year-old Gemma Gatdula is the newest addition to the White Castle family. She was hailed the best among the 10 girls who made it to the grand finals of The Search for the Next White Castle Girl, which aired on Saturday, July 28, on ABS-CBN.

When interviewed by PEP (Philippine Entertainment Portal) during the taping of the final episode of the show, Gemma was still in shock. All she could say about her win was, "Sobrang saya ako kasi 'yong dinasal ko natupad."

She hopes that after winning the reality show, this would become a stepping-stone for her to enter show business. Incidentally, Gemma also tried to penetrate the industry by joining the modeling reality show Philippines' Next Top Model (PNTM), wherein she was named one of the 14 finalists. The sales administrative assistant who stands 5'7" tall, was eliminated during the fifth episode of the local franchise of America's Next Top Model. Grendel Alvarado, a student from Bacolod, Negros Occidental, was named as the winner of Cycle 1 of PNTM.

SPECIAL AWARDS. Before the lucky lady was announced, there were several challenges that the 10 finalists had to surpass in order to determine the winners of four minor awards given out during the finals night.

At the beginning of the show, the girls entered the stage wearing bright-colored capes. While sashaying down the ramp, the finalists slowly removed their capes, revealing their slender bodies wearing white one-piece bathing suits.

After this segment, Romyreen "RR" Enriquez was chosen for the "I Wanna Date" award. She also wowed the guys with her red bikini that got her the most number of roses from male members of the audience, which was the basis for Best Red Bikini award.

Aside from taking to the catwalk, the finalists also performed dance numbers. They all danced sexily while using a pole as a prop. For this challenge, Jemima Sevilla was hailed as the best lady who grinded at the pole. The finalists also had a showdown with comedienne Pokwang, who imitated Christina Aguilera, in their "Candy Man" performance. After this number, Gemma was selected for the Candy award.

THE FINAL THREE. After giving out minor awards, three of the 10 finalists were chosen for the final test, which was a question-and-answer portion with the judges. The three short-listed finalists interviewed by the jurors were Gemma, Jacq, and Vanessa.

Gemma was asked to choose between her career and her boyfriend. She opted for her career rather than her lovelife. She explained, "Kung talagang mahal ka niya [boyfriend], susuportahan ka niya sa lahat ng gusto mong gawin."

The second finalist was Vanessa who accidentally burned a part of her face while doing a fire dance in Boracay. She was asked to clarify the issue with her mom. It was revealed previously that the finalist had a rocky relationship with her mom and that Vanessa allegedly disowned her mom. However, the White Castle girl aspirant denied this and insisted on how much she loves her mom.

Lastly, Jacq Yu was asked about her dad who recently passed away. To explain how she coped with this loss, Jacq told the judges, "Ako kasi, my motto in life is, life goes on, di ba? You shouldn't be stuck in one place na parang you'd get depressed, kasi nothing will happen to you."

While waiting for the final scoring of the judges, the audience was entertained by the dance number of current White Castle Girl Roxanne Guinoo, who was wearing an equestrienne outfit.

The star of Natutulog Ba Ang Diyos? then joined the show hosts, Archie Alemania, Marielle Rodriguez, Janelle Jamer, Joross Gamboa, and Rafael Rosell, to announce the White Castle Girl winner Gemma—who also happened to be the personal pick of the current White Castle Girl. Roxanne revealed that her one-year endorsement contract with White Castle has already expired and that she will no longer be promoting this brand.

Jacq was then named as the first runner-up while Vanessa became the second runner-up of the contest.

Aside from a one-year endorsement contract with Distilleria Limtuaco, makers of the White Castle, Gemma will also have a contract with ABS-CBN Talent Center. Other prizes that she won were a house and lot, a trip for two in Boracay, a one-year supply of salon services, and gift certificates from the program's clothing sponsor.

Click MORE PICTURES to view photos of the grand finals.