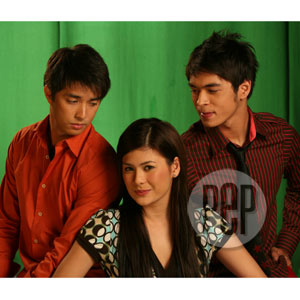 (From left) Joross Gamboa, Roxanne Guinoo, and Jake Cuenca all say that there is no tension among them even though Joross used to be Roxanne's boyfriend and Jake is now being linked to the young lady. Their real-life situation is quite similar to the plot of Natutulog Ba Ang Diyos?, which has been moved from its original 6 p.m. broadcast to a 9:30 p.m. timeslot.

Just two weeks after its premiere, Sineserye Presents: Natutulog Ba Ang Diyos? was immediately moved from its afternoon timeslot to a primetime slot. It is now aired at 9:30 pm, right after Walang Kapalit.

According to the management of ABS-CBN, these changes were brought about by numerous requests over text messages and e-mail from avid viewers of the program.

In this remake of the 1988 film directed by Lino Brocka, Roxanne Guinoo plays Gillian, the rightful heiress of a wealthy couple. She was switched at birth with Andrew, son of a driver and a maid. Jake Cuenca plays Andrew, who grows up to be irresponsible, but it turns out that he's secretly in love with Gillian. Adding confusion to the story is Joross Gamboa as Mark, Andrew's best friend, who also has feelings for the same girl.

With these changes in Natutulog Ba Ang Diyos?, the entertainment press asked if the show would be extended since usually a sineserye airs for only six weeks and a primetime teleserye usually has 13 weeks or one season.

On the other hand, director Jerry Lopez isn't bothered about running out of materials for the show now that it is part of the Primetime Bida block. "We are all very lucky to be given a material which is so rich. Punung-puno po talaga ang material, hindi 'yung bida lang, sila buong-buo iyong character. Maganda po 'yung film, maganda po iyong materials kasi makapal. Pwedeng-pwede siyang i-extend. Pwedeng nine [episodes] pwedeng 10 [episodes], pwedeng one season."

Meanwhile, the lead stars of Natutulog Ba Ang Diyos?—Jake, Roxanne, and Joross—admitted that they felt happy and at the same time pressured when they knew that their show is moving up to primetime slot.

As for Joross, he admits being pressured as well, but he pointed out that working with his co-actors gives him confidence to portray his role effectively.

This just proved that there is really no tension between the three stars—Joross was the former boyfriend of Roxanne, who is now the current girlfriend of Jake. Roxanne talked about her past relationship with Joross, "Super tagal na, naka-two years na po. Naka-recover na po kaming dalawa so masaya na kami sa kani-kanyang mga buhay namin. Wala na tapos na."