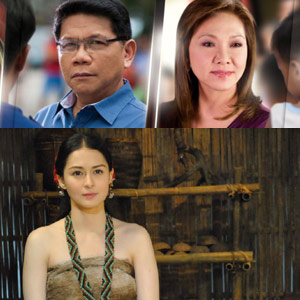 "Broadcast journalists Mel Tiangco and Mike Enriquez, anchors of GMA's top-rating primetime newscast 24 Oras, were elevated to the Anak TV Makabata Award Hall of Fame after seven years of consistently topping the annual surveys of TV personalities who are "trustworthy, reputable and are role models to children."

"Thecountry's no. 1 TV newscast24 Oras made it to Anak TV's list of Top 10 Household Favorite TV Shows together with the news magazine show Kapuso Mo, Jessica Soho, longest-running noontime variety show Eat Bulaga and the epicserye Amaya. Eat Bulaga host Vic Sotto and GMA news pillars Jessica Soho, Arnold Clavio and Vicky Morales were likewise included in the list of TV personalities who are considered the "most credible, wholesome and worth emulating by the youth."

"During the awarding ceremonies, Anak TV also bestowed the Anak TV Seal to television programs that the organization deemed "wholesome and child-safe."

"At the 7th PopDev Awards, GMA News TV also received the Best Magazine/Talk Show Program Award for the "RH Bill: The Grand Debate TV special," which aired in May. The said special gathered representatives from the government, religious groups, and women's organizations for a debate on the controversial Reproductive Health (RH) Bill. It also enjoined viewers to actively participate in the discussion through the use of social media tools.

"GMA News TV is the news channel of GMA Network, while GMA News Online (www.gmanetwork.com/news) is the Network's news website."