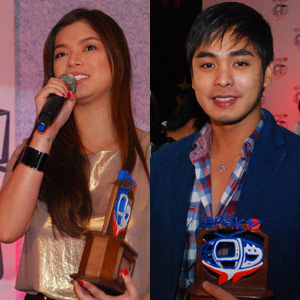 Angel Locsin (left) and Coco Martin (right) are two of the ABS-CBN artists included in the Makabata Stars, or those who are most trusted and admired by the youth.

"When it comes to television viewing, most parents in the Philippines trust ABS-CBN shows, news anchors, and celebrities as reflected in the number of Anak TV Seal Awards bestowed to the Kapamilya network.

"ABS-CBN bagged a total of 51 Anak TV recognitions, making it the most child-friendly TV network in the country. This is 18 more than GMA's 33 awards and 40 more than TV 5's 11 awards.

"The five other ABS-CBN programs are 100 Days to Heaven, Showtime, Budoy, Maalaala Mo Kaya, and Matanglawin.

"When it comes to news, more ABS-CBN anchors made it to the Anak TV Roster of Makabata Stars 2011. Seven ABS-CBN broadcast journalists made it to the list as compared to GMA's five and TV5's 0.

"Korina Sanchez and Julius Babao were elevated to its Hall of Fame for consistently topping the surveys in the past seven years. News anchors Kim Atienza, Noli de Castro, Ted Failon, Karen Davila, and Bernadette Sembrano made it the coveted list.

"More ABS-CBN stars are trusted by parents than any other network's artists. ABS-CBN had 12 stars in the list as compared to GMA's 1 and TV5's 2.

"The Anak TV Seal Award is an annual national recognition given by the Southeast Asian Foundation for Children and Television honoring child-sensitive programs and personalities in the Philippines.

"With ABS-CBN gaining the most viewers and receiving the most awards, it could only mean that the Kapamilya network is doing something right in offering quality programs and trustworthy news and entertainment personalities."