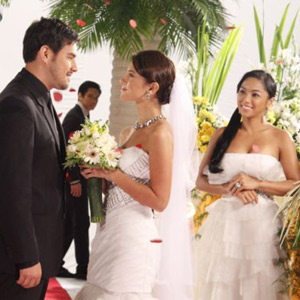 GMA Network takes afternoon prime dramas a notch higher as it brings an intense and intriguing offering to Kapuso viewers via Broken Vow.

Leading the cast is Bianca King who scored her big break when she played the lead role opposite award-winning actor Dennis Trillo in Sinner or Saint. Bianca is ready to steal the spotlight once more with her role as Melissa Santiago, a simple provincial lass about to marry her life-long sweetheart.

Luis Alandy has proven he has the makings of a leading man with the success of his numerous primetime and daytime dramas in GMA. After the commendable run of his last afternoon drama, My Lover, My Wife andhis primetime drama, Iglot, Luis delivers another winning performance, this time, as he breathes life to the character of Felix Rastro, the guy who will help Melissa survive her horrific ordeal.

Gabby Eigenmann has racked up big credits for his striking character Desmond in the high-rating primetime drama, Munting Heredera, where he bagged his very first acting award as Best Supporting Actor in the 2011 Golden Screen Awards for Television. In this new drama series, Gabby joins the ranks of the network's prized leading men as he plays the coveted role of Roberto Sebastian, a budding politician destined to marry the woman of his dreams.

Following her breakthrough performance in the epic series, Amaya, Rochelle Pangilinan has taken her acting chops to the next level as she steps into one of the lead roles in Broken Vow as Rebecca Sta. Maria, the scorned ex-girlfriend of Roberto who will do anything to win him back. She is quickly cementing her spot among the network's finest actresses and is geared up to prove she has the talent to play all types of roles on the small screen.