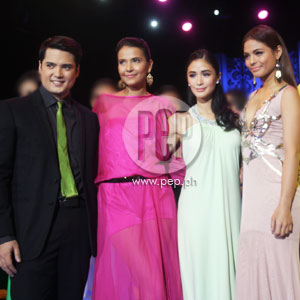 The cast of Legacy composed of (L-R) Geoff Eigenmann, Alessandra de Rossi, Heart Evangelista and Lovi Poe are engaged in a power struggle for control of a beauty company.

Anyone whose eyes are trained in the language of cinema will see that Legacy, GMA-7's new primetime series, is more than a worthy watch.

We watched five episodes last week, and these episodes are of top quality. The tag #LegacyGMA even trended in Twitter worldwide.

The primetime soap's story revolves around the lives of the rich and powerful, specifically those who own a company named Legacy, which creates beauty products.

One of its owners, Cesar Alcantara (Dennis Trillo), is trapped in a loveless marriage with bank heiress Eva (Chynna Ortaleza). He finds true love with a factory worker named Isabel (Bianca King). Alarmed, Eva threatens Isabel to leave her husband. A distraught Isabel, who is pregnant with Cesar's child, moves to the countryside.

Years later, the children of Cesar, Eva, and Isabel face each other to fight for the rights to Legacy.

What's admirable with Legacy is that it has a distinct experimental style, and each frame looks like it has been carefully planned to hold hidden meaning.

Consider a scene where protagonist Diana Calcetas (Heart Evangelista), Isabel's daughter, and friend Eboy (Mark Bautista) are sitting outside a mall, to rest after trying to look for a job for hours. The two then talk about applying for a job at Legacy. The framing has them in the bottom-right of the screen, while the Legacy building is at the top-left, dwarfing the two. This complements their conversation that their current status will not get them a job at this company.

Or consider the scene where Diana rushes to her mother Isabel (now played by Jackie Lou Blanco) fighting her neighbors in the middle of the street. Isabel then faints and loses hold of a plastic bag containing a kilo of rice, which spills into the street. Moments later, a tricycle runs over the scattered rice, implying that Diana and Isabel are still poor.

Legacy is directed by indie director Jay Altajeros, so it is not surprising that this show has touches of cinematic poetry. Jay may actually be the most experimental director on TV that we have today. His last afternoon series, Kung Aagawin Mo ang Langit, was also experimental in the sense that it did not carry the over-the-top hysterics and caterwauling our soap operas have been plagued with today.

This visual style is not the only aspect strong with Legacy. The actors in the show's first week also make high marks, particularly Chynna Ortaleza, Dennis Trillo, and Bianca King. The lovely Sue Prado is also memorable for her guest role as Chynna's conniving mother. Sue plays a battered woman in Munting Heredera, so it is quite admirable to see her transforming into a completely different character in another TV show.

The screenplay is also notable for featuring a lot of quotable lines in recent TV memory.

All of these factors make Legacy a show to religiously follow this 2012.