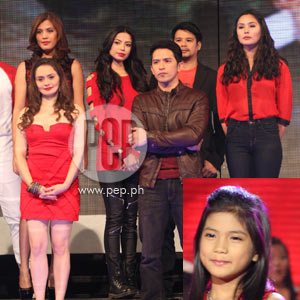 GMA-7's original primetime creation, Biritera, will feature the life and career of a young singer as she navigates the highs and lows in the colorful world of the music industry.


Beginning February 6, viewers will be able to watch how music and drama will intertwine as the story progresses.

In this new show, lead stars Dennis Trillo and Glaiza de Castro get to showcase not just their acting abilities, but also their talent in singing as they assume the roles of Andrei, the lead vocalist of the band called The Bridge, and Mikaela, a drummer/singer, respectively. In fact, Glaiza took up drumming lessons in preparation for her role.

Biritera also proudly introduces GMA-7's newest child discovery, Roseanne Magan, who plays the role of an aspiring young singer of the same name. As her character embarks on an emotional journey from becoming an amateur singer to a famous biritera, Roseanne discovers many things about her roots, her past and her real identity.

The story takes off from the death of the reigning biritera, which sends Mr. D (Ryan Eigenmann), a respected talent manager, into a frantic search for an immediate replacement.

Upon receiving an invitation to judge in a provincial singing search, Mr. D also brings along Andrei (Dennis Trillo), who then finds himself drawn to one particular contestant, Roseanne (Roseanne Magan). However, Roseanne ends up losing the competition to Barbie (Sweet Ramos), Roseanne's rival, much to Andrei's disappoint.

But no one is more disappointed than Roseanne, who wants to succeed as a singer so she can help her adoptive mother Remy (Angelika dela Cruz). Remy, on the other hand, disapproves of her daughter's dream and would rather see her concentrate on her education.

Unknown to them, Andrei uploads a video of Roseanne taken during the competition. As fate would have it, the video goes viral making Roseanne an instant internet sensation, and attracting talent scouts including Mr. D.

Remy, however, remains adamant in discouraging Roseanne to pursue her dream of becoming a professional singer. But despite how firm she was, Remy finally gives in when Jo (Rich Asuncion), Roseanne's aunt, turns up after recognizing Roseanne as her sister Carmela's (Claudine Baretto) daughter. Jo convinces Remy to allow Roseanne to try her luck in the industry making Remy believe that Jo has Roseanne's best interest at heart.

As Roseanne begins her quest towards becoming a full-fledged biritera, Remy becomes more concerned of her daughter's welfare as Jo takes over Roseanne's life. Andrei also shares the same sentiment, as he feels guilty for prodding Mr. D into managing Roseanne, who seems to be taking on too much too soon only to become successful.

How will Roseanne cope with the demands brought about by her newfound career? Will she eventually make it to the top or will she succumb to the pressure before she can even see her dreams come true? How will Andrei and Mikaela figure in this situation? Could there be a deeper connection between Andrei and the biritera Roseanne?

Be inspired by this captivating story, which is based on an original concept by Mr. Jun Lana, about chasing after one's dreams without losing sight of the important things in life. This newest GMA Telebabad offering is directed by Mr. Maryo J. delos Reyes and written by Agnes Gagelonia-Uligan under the creative supervision of creative director Jun Lana, creative head Jake Tordesillas and creative consultant Richard Cruz. Biritera is a creation of the GMA Drama Group headed by Senior Vice President for Entertainment Wilma V. Galvante, Vice President for drama Lilybeth G. Rasonable, and Asst. Vice President for drama Redgie A. Magno with executive producer Juel Balbon leading the production team.