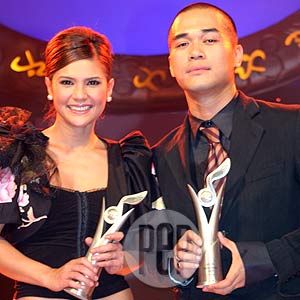 Vina Morales and Kjwan's lead vocalist Marc Abaya show off the trophies that they won in IKON Philippines. As the country's representatives in IKON ASEAN, they bested other finalists from Malaysia and Indonesia to win the soloist and band category, respectively.

Vina Morales won over the hearts of the audience and judges to take the title as first ever IKON winner last August 12, at the Putrajaya Convention Center in Kuala Lumpur, Malaysia. The home audience initially expected their soloist to win it all. The Malaysian representative Jaclyn Victor is a huge star in her home country—she was named the Malaysian Idol in 2004 and has won several local and international awards.

IKON ASEAN is a regional music competition for professional singers and bands whose talents deserve wider exposure in Southeast Asia. It is designed to showcase and recognize artists from countries such as Malaysia, Indonesia, and the Philippines.

The finalists had earlier competed in their own countries before moving on to last night's competition. One of the main requirements of the contest is that each artist must perform an original song made for or by them.

The band category was won by Kjwan, besting the Malaysian band OAG, which also enjoyed crowd support from the locals. Even the Indonesian band Tahta had their fans in Malaysia. But it was Kjwan's cool brand of funk metal and original sound that won them the title.

Vina performed "Pangako Sa ‘Yo (A Promise to You)," a song from ABS-CBN's drama series with the same title, and "Feels So Nice." Kjwan sang "Invitation" and "One Look."


What makes the grand finals different from all qualifying rounds is that the winner is determined solely by judging. Unlike the elimination rounds from each country, a certain percentage was allotted for text voting.

Kjwan got the show rolling with their song "Invitation" from their second album Two Step Marv. The five-man band were a sight to behold in their black silk suits.

Then came Jaclyn Victor who sang a medley of her hits, including "Tunggu Sekejap," "Engkau Sona Bulan," and "Getaran Jiwa." The audience went wild for her incredible belting and impressive vocal performance. OAG (Malaysia) performed their hit "Nowhy2."

Next was Vina Morales' first song "Pangako sa ‘Yo." Her heartfelt rendition was able to convey her emotions, breaking the language barrier between her and the predominantly Malay crowd. The atmosphere in the stadium changed midway as Malaysians began to sing the chorus.

By the second round of performances, the contestants had already warmed up, allowing them to raise their energy level a notch higher. Jaclyn Victor again sang another medley, this time with even more power. The crowd gave her a standing ovation when she performed her hit "Gemilang."

In an interview with PEP (Philippine Entertainment Portal) via cell phone, Vina said, "Buong buo ang supporta sa ‘min ng Fiipino community sa Kuala Lumpur. I was inspired by their presence. I thank the whole country for praying for us. Obviously the prayers worked."

Kjwan lead singer Marc Abaya described their competitors, "Ang babait nilang lahat. We'd wait for each other [in] the venues and rehearsal. We'd share what the music scene is like. I saw the strengths and weaknesses of each band, including our own. They didn't have rock star attitudes na mayabang. Victor was really good. We were blown away the first time we saw her a month ago. She was hitting impossible keys. But eventually it was Vina who won them over with her total performance."

IKON Philippines Artists Management Director Twinky Lagdameo described the camaraderie and friendships that were developed between the performers from the different countries. "Everybody was so supportive and professional. You could see that they're all sincere. Friendships were formed. Some of them want to collaborate with each other. There's so much great music outside we don't know about. Jaclyn is amazing. I want to do stuff with her here. During rehearsals we found out that she's a fantastic jazz singer and she asked for Skarlet's CD. Artists and media were asking about Grace Nono, Noel Cabangon, True Faith, The Dawn, and Sitti."

The IKON ASEAN grand finals was shown on RPN-9.