Budoy cast will bid farewell this Sunday on ASAP 2012 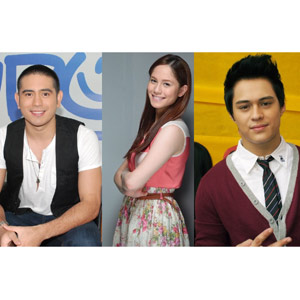 Supah Hot ASAP Girls Cristine Reyes, Iza Calzado, Maja Salvador and KC Concepcion kick off the women's month as they mark their teritory on the ASAP dancefloor, while ASAP's Ultimate Men pay tribute to women with a rousing opening salvo. Meanwhile, fall in love with the charms of the hottest idols Xian Lim, Matteo Guidicelli and Markki Stroem.

ASAP welcomes two of the newest Kapamilya teleseryes as Piolo Pascual, Maricar Reyes and Jericho Rosales of Dahil sa Pag-ibig and the magical cast of Wako-Wako grace the centerstage; while the Budoy cast led by Gerald Anderson, Jessy Mendiola and Enrique Gil extend their appreciation and bid their farewell as the show comes to a close.

Everyone should get their temperatures checked as Enrique, Enchong Dee, Sam Concepcion, Rayver Cruz, Iya Villania, Empress and John Prats spread the 'Dougie Fever' on Supahdance.