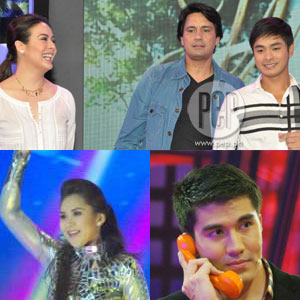 "ABS-CBN continues its winning streak in the primetime TV race as it dominated households nationwide in February with an average audience share of 41.4% or almost a ten-point lead from GMA-7's 31.6%, according to industry-trusted multinational market research group Kantar Media.

"ABS-CBN further widened the lead in primetime in the latter part of February with the sustained strength in viewership of Walang Hanggan, which has been hitting over 30% with an average of 31.6% for the period February 20-29, elevating ABS-CBN's weekday primetime shares to a staggering 45% and bringing GMA-7's share down to 29.6% in the same time period.

"The primetime block on television (6 PM to 12 MN) is important for TV networks because it is the time most Filipinos are watching television and advertisers put most of their TV ad placements to reach more viewers.

"Kantar Media, which has national samples of 1,389 homes and 8,015 individuals that are statistically representative of total Philippine TV population, also reported that 12 out of the top 15 most watched programs in the country in February were produced by ABS-CBN with the top four spots occupied by its primetime offerings.

"ABS-CBN registered a net income of P2.2 billion in the first nine months of 2011, while news media reported that GMA Network earned P1.58 billion net income in the same period.