Carla Abellana tells Cosmo: "I gave up my lovelife for Rosalinda." 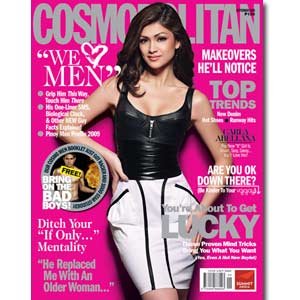 "He has brought so much joy into my life. [And] we're still in touch... Time off lang talaga but not naman goodbye forever," says Carla Abellana about ex-boyfriend JC Intal.

Carla Abellanais fun, fearless, fabulous, and single. As she makes her debut on the cover of Cosmopolitan magazine this September, she talks about the special men in her life, including ex-boyfriend JC Intal.

From nurturing a five-year relationship in relative anonymity—they met when Carla was a college freshman in De La Salle University and JC was a basketball player in Ateneo de Manila University—Carla was suddenly thrust into the limelight as she bagged the title role in GMA-7's Rosalinda. The demands of the job clearly took toll on the relationship.

"I was starting to observe what he had been going through [since I joined showbiz, so] we talked about it," she tells Cosmo. "He's giving me time to deal with the pressure of the business."

Carla is not closing her doors on JC though.

"He has brought so much joy into my life," she says. "[And] we're still in touch... Time off lang talaga but not naman goodbye forever."

The time apart will allow her to hone her craft in the industry she never really thought she would enter. "I really want to concentrate on my job," she says. "I want to focus on my projects. I want to be a better actress."

Helping her through the wild ride that is showbiz is onscreen partner Geoff Eigenmann, who is also among the special men in Carla's life. As she admits that he is special to her, does this mean that a romance is waiting in the wings?

"Well, he admitted that he has a crush on me," she shyly tells Cosmo. "Of course, di ba,when you work with somebody, iba yungbonding."

Although she would prefer not to get into a showbiz romance, she also admits that the possibility is always there.

"People in show business are also just... people. They're also human. They're capable of loving as well, so you'll never know," she points out, "But with the schedule? Naku, hindi puwede talaga!"

Read more about Carla and find out who made it to this year's list of 69 Bachelors and 10 celebrity Centerfolds by grabbing your copy of Cosmopolitan, available in newsstands, bookstores, and supermarkets nationwide. For behind-the-scenes photos and videos of Carla's first Cosmo pictorial, visit www.Cosmo.ph.