Carla Abellana buckles up for first movie and debut record 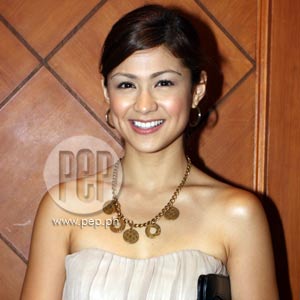 Next on Carla Abellana's to-do list is an album to be released by Universal Records. "It's a music album, not a dance album," she explained to PEP (Philippine Entertainment Portal). "I'll be singing more... Easy listening siya, ballads. Wala pa kasi kaming nababalitaang songs or song choices but I'm sure maraming revival."

"I really consider it as a compliment," revealed the Rosalinda lead star to PEP (Philippine Entertainment Portal) in an interview at Marian's belated birthday party held at the Imperial Palace Suites in Quezon City last August 20.

The pretty showbiz neophyte, however, dismissed the impression that there's a real rivalry going on between them.

"Wala naman talaga. I'm just a new member of the GMA family and I'm not here naman to bring anybody down... Comparisons are there, okay lang naman, walang problema. Wala sa amin 'yon."

With Rosalinda steadily gaining ground in the ratings contest, Carla could not contain her excitement. The show is entering a new exciting stretch, anchored mainly on the love story between Rosalinda and Fernando Jose (Geoff Eigenmann).

Carla's route to show business contradicts that of most aspiring actors. For one, the daughter of '80s matinee idol Rey "PJ" Abellana skipped going through countless, tedious auditions to land bit roles. Story has it that Carla auditioned for Zorro only to be turned down. Unknowin to the aspiring actress, network executives earmarked her for a project—the local adaptation of a popular Mexican telenovela which Carla herself now topbills.

MAKING THE MOST OF OPPORTUNITIES. Carla had little time to savor the success of Rosalinda.

Even at this early of stage of her burgeoning career, Carla found herself inundated with various projects, solid proof of the producers and industry bigwigs' faith in her, despite her rookie status.

A possible Metro Manila Film Festival entry project produced by Regal Films and an album under Universal Records are lined up for Carla.