PBB Double Up ex-housemate Princess Manzon on Tom Rodriguez: "He is a good man." 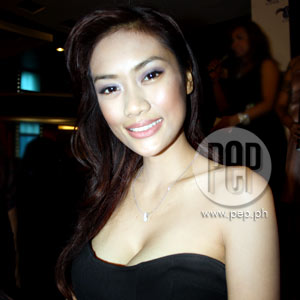 Former Pinoy Big Brother Double Up housemate Princess Manzon admitted that she was initially scared about laying inside a casket for her role in the indie film Two Funerals. This film, directed by Gil Portes, is currently being screened in select SM cinemas.

Her grieving mother in this 2010 Cinemalaya entry is portrayed by Ms. Tessie Tomas. The characters of Ms. Tessie and Xian have to go on a long road trip in order to reclaim the body of Princess, which has been mistakenly sent to Matnog, Sorsogon.

TOM RODRIGUEZ. Even though Tom Rodriguez was not present at the premiere, Princess says that her fellow PBB ex-housemate has been very supportive of her film. He had already watched the movie twice when it was screened at the Cultural Center of the Philippines.

In a previous interview with PEP, Tom avoided putting a label on his relationship with Princess. (CLICK HERE to read related article.)

When asked if they are they dating each other exclusively, Princess answers, "Of course. We're doing fine. We often go out."

Does she think that Tom is boyfriend material?

"Yes, Tom is really nice and very sweet. I think he is really a good man."