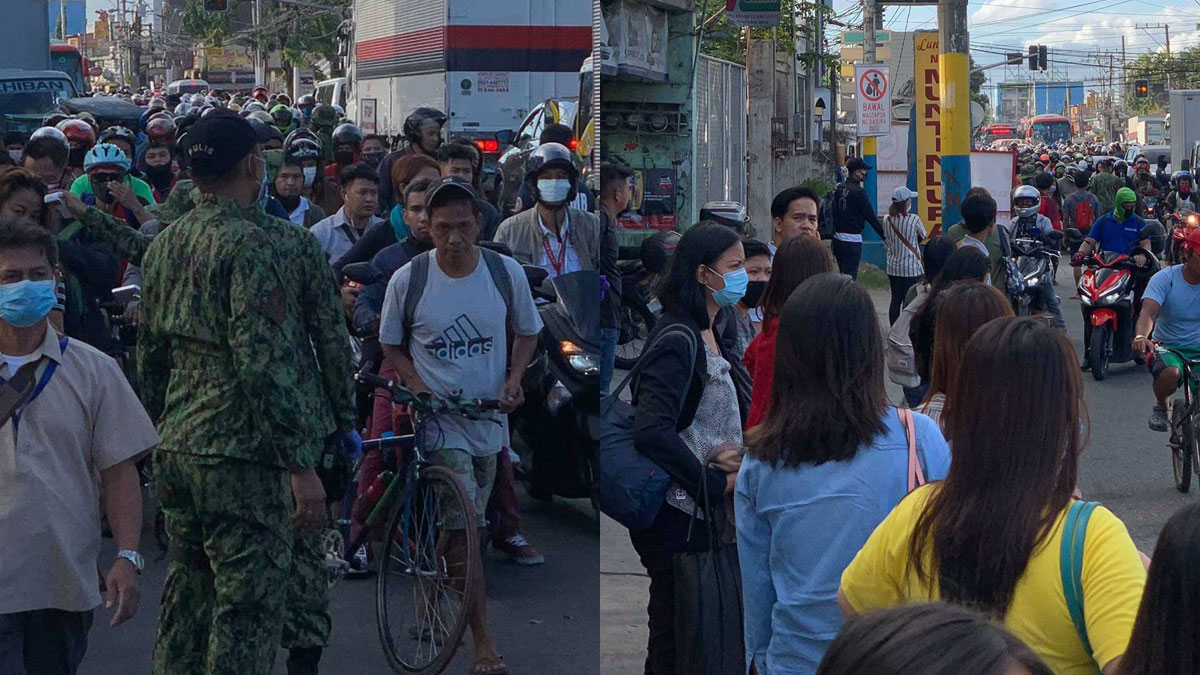 On Monday, March 16, motorists and commuters are stranded for hours at checkpoints on their way to work. This photo was taken by a commuter at the Muntinlupa and San Pedro boundary checkpoint.
PHOTO/S: @SouthSnippets on Twitter / Val Cordial

On Thursday night, March 12, 2020, President Rodrigo Duterte declared the nation under Code Red Sublevel 2 in light of the COVID-19 crisis.

As a measure to contain the spread of the virus in Metro Manila, he also announced placing the National Capital Region under community quarantine for a month to limit the movement of people in and out of Metro Manila.

Part of the community quarantine measures is to put checkpoints in the entry points to Metro Manila.

Their main task is to determine the purpose and body temperatures of commuters entering the capital.

Meanwhile, the Department of Transportation (DOTr) has issued guidelines on social distancing in public transport.

According to the guidelines, taxis and TNVS units are allowed to have four occupants while UV Express vehicles may have six occupants. Both headcounts should include the passengers and the driver.

Jeepneys are allowed to have passengers half of their regular seating capacities.

Buses are only allowed to have 25 occupants, including the driver and the conductor, and should follow the "no standing policy."

The rail transits MRT and LRT are continuing their operations, but reducing passenger capacity by 25%.

On Sunday, March 15, Presidential spokesman Salvador Panelo said the government said it was satisfied with the initial implementation of the community quarantine in Metro Manila.

But the second day, Monday, March 16—with hundreds of commuters stranded as they try to go to work in the metro—was chaotic.

Commuters waited and lined up for hours as most of the public utility vehicles reached them already at full capacity.

At the checkpoints, motorists and commuters piled up. Each was checked manually for fever before getting through.

There was the big problem of soldiers not having enough thermal scanners for the thousands of commuters.

Heavy traffic was observed at the boundary of Valenzuela and San Juan del Monte, Bulacan.

Traffic congestion was also experienced on the Marcos Alvarez road, where the checkpoint of Bacoor in Cavite and Las Piñas is located; the Batasan-San Mateo Road, the checkpoint area between Quezon City and Rizal, and the Muntinlupa and San Pedro boundary, among many others.

One Twitter user urged the government to suspend work for two weeks in order for the setup to work.

Senator Win Gatchalian also offered some suggestions: "Gov’t has to impose a MM wide lockdown to reduce human contact and slow down the speed of the virus - 1. No work for public and private 2. Everyone stays home 3. No entry to MM and vice versa. 4. close malls and other places of convergence. 5. prohibit gatherings in barangays."

On Twitter, frustrated netizens began appealing for socio-economic measures to ease the effects of COVID-19 on their livelihood.

At press time, the Philippines already has 140 laboratory-confirmed cases of COVID-19. The country has reported 12 fatalities.

There are still 153 persons under investigation for COVID-19 currently admitted at hospitals around the country.