Carla Abellana and Geoff Eigenmann: Are they already a couple? 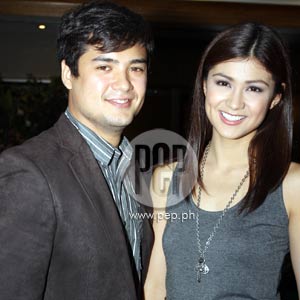 GMA-7's primetime soap Rosalinda may be coming to an end, but the show's love team—Geoff Eigenmann and Carla Abellana—is rumored to be continuing the sweet loving feeling even off-cam.

The two have earned a considerable number of followers, thanks to their screen chemistry in Rosalinda and how everything just looks real when they engage in romantic scenes. So real are the emotions they show on screen that people start to wonder if there might be something going on between them. Rumor has it that they're sweet with each other on the set, too.

Carla recently broke up with PBA player JC Intal after their five years as an item. Geoff is still very much available. Doing "one plus one," their fans wish the two would shed light on the real status of their relationship.

Yesterday, November 8, Carla and Geoff faced the hosts of Showbiz Central to answer the big question: Are they a couple now?

ATTRACTION LEVELS UP. Geoff admitted before in a different interview that he was taken by Carla's beauty the first time they met on the set of Rosalinda. Has the attraction moved up over the days of taping with his leading lady?

"I guess everyone would agree me naman na Carla is a very beautiful girl," Geoff said. "Sobrang ganda ng ugali niya. Physically, she's beautiful. The way she thinks and she brings herself. Romantically naman, now we're just really focused on our work and iyon ang understanding namin. Kung ano kailangan namin gawin on screen, that's what we're gonna do to make what we are doing—work."

Work in a sense that he's found the time to drive Carla to and from work?

JEALOUSY? JC and Carla had been a couple for five years before calling it quits recently. Was JC jealous when he learned of Carla and Geoff's onscreen chemistry?

"No, we did not break up because of Geoff," Carla firmly said. "It was really because of me, my new career, ang bago kong buhay. At first, akala namin kaya, e, na kakayanin talaga na i-balance both work and our relationship. Pero hindi talaga. Sobrang hirap. It's a combination of a lot of things and a lot of issues."

That said, what is he waiting for now that Carla's finally single?

By being open, does that mean that Geoff can stand a chance as a suitor?

The recent proliferation of JC and Carla's photos in a tabloid even after Carla announced her breakup made some people think if she is just making a gimmick out of her relationship and that she is really still with JC. Has this in any way made Geoff bothered or jealous?

"Hindi naman," answered Geoff. "Mas concerned ako for her kasi tapos na nga 'yon, tapos ngayon pa lumalabas. It's all in the past and why make a big thing out of it pa, di ba?"

Geoff added, "Siyempre, kung may gusto ka sa certain someone, e, pati 'yong family niya magustuhan ka, di ba? You're gonna have to prove yourself not just to the one you like but also to the rest of the family, so good thing 'yon."