Oliver Tolentino: Dressing up the stars 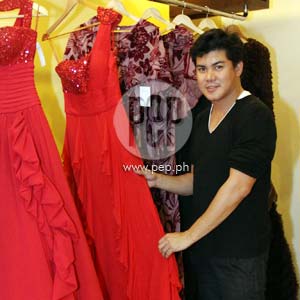 It will be a busy year for Filipino fashion designer Oliver Tolentino. His first stop in 2011 is the Golden Globe Awards on January 16, where he hopes to show off some of his creations on the red carpet. More Pictures

"I'm so proud," Oliver told SPOT.ph. "It's piña!" he continued beaming. (CLICK HERE to see photo of the dress.)

It may not be the last time we will see an Oliver Tolentino creation in this year's Golden Globe Awards.

The soft-spoken designer flew to the United States last January 12 to present some of his latest designs to celebrities who will be gracing the prestigious awards night.

Oliver would be joining other known fashion designers from across the globe—all hoping to catch the eye of celebrity styling agents, who were coming in droves to check out pieces they think would fit their respective star clients.

"Sana!" exclaimed Oliver, hoping to see some of his creations on the red carpet for this year's Golden Globe Awards.

"Hopefully, kasi alam mo naman, the stylist will just pull out some of your dresses and you'll never know until you see it na suot na talaga nung mga artista 'yong gawa mo during the actual event."

The Golden Globe will be just one of the many glitzy events for Oliver this year, particularly in the upcoming months.

GLAMMING UP CELEBS. One indication that a designer has made it to the big league is when celebrities and high-profile personalities start asking for appointments.

It was of course, both shocking and intimidating at first, but Oliver has learned to deal with superstar clients over the years.

Like those before and after him, the combination of hard work, dedication, talent, and passion helped him gain the confidence and trust of patrons regardless of social status.

During the time of this interview, actress Pinky Amador was at the boutique asking Oliver to create a gown which she intends to wear for an upcoming formal evening event.

Singer Lani Misalucha also dropped by a few hours earlier to personally pick gowns that were readily available from the racks.

Lani is one of his favorite star clients, along with Kuh Ledesma, Lea Salonga, and Journey vocalist Arnel Pineda.

"They're very, very nice and easy to talk to," he revealed.

Oliver also had the pleasure of creating gowns for Pops Fernandez, Regine Velasquez, and Zsa Zsa Padilla, during their 2008-2009 Divas 4 Divas U.S. tour.

BEYOND ASIA. Opening his own boutique in Los Angeles, California in 2009 guaranteed Oliver's presence in the international fashion scene.

The Filipino designer immediately announced his arrival when he was invited to the Los Angeles Fashion Week (DLAFW) to witness the Spring-Summer 2010 presented by the Geffen Contemporary at the Museum of Contemporary Art (MOCA).

Being in America also attracted the interest of Hollywood-based clients like singer-actress Anna Marie Perez de Tagle. The 20-year-old star of Camp Rock and Fame was spotted attending the 2009 VH1 Divas show in an Oliver Tolentino gown.

Oliver also designed the dress worn by the wife of rocker Joe Walsh of the Eagles in a Grammy's event held in L.A.

He also endearingly mentioned award-winning singer Macy Gray as one of his celebrity patrons.

"Kasi gusto niya talaga kakaibang fashion kasi medyo bohemian type siya. So sabi niya sa 'kin, 'When you make me some clothes, I want something different and something that would make me feel good when I'm on stage.' Until now 'pag kailangan niya ng damit she calls us."

Meeting foreign celebrities face to face, according to Oliver, doesn't happen often since most of the stars employ the services of stylists who scour the shops and choose clothes for them.

Designers cherish the thrill of receiving a phone call from agents and stylists informing them that their creation has hit the red carpet.

Mrs. Marcos, said Oliver, is his "ultimate favorite since I was a kid."

He added, "When I was looking at her sa news or sa mga social gatherings, I told myself, 'One of these days I want to dress up Madam.' My dream came true four years ago when she approached me to make her birthday gowns."

Imelda gave Oliver a free hand when it came to the design and style of her gowns: "She said, 'I just leave it to you, Oliver. Whatever you want to design for me, I'll wear it.'"

"I like Kristine Hermosa," he said. "I think she'll look great in my gowns."

Who are his Hollywood dream clients?

"Of course I'd like to dress up Angelina Jolie and Nicole Kidman!" Oliver said.