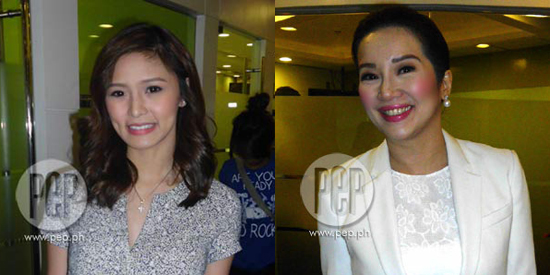 In the upcoming Chito Rono movie Etiquette for Mistresses, Kim Chiu (left) will play a lounge singer in Cebu who will be brought by her partner to live in Manila. She will then meet Kris Aquino's character who will teach her the rules on being a "kabit."

Kris Aquino admits she is responsible for making Kim Chiu agree to play a mistress in their upcoming film Etiquette for Mistresses.

In a previous interview, the TV host-actress already revealed why she convinced Kim to do a mistress role.

It was because she saw that the role was fit for the 25-year-old actress.

“Super! In a way, di ba, medyo written in us in mind or written in what we can deliver.”

Read: Why did Kim Chiu agree to do mistress role in Etiquette for Mistresses?

In the August 11 episode of Kris TV, Kim admitted that she was scared when she received the offer to do this sensitive role.

Kim became excited to do the project since it gives her the chance to work with veteran director Chito Rono and comebacking actress Claudine Barretto.

Kris shared how she convinced Kim to do the movie, saying that it has a “powerful” message.

Kris also clarified that the movie does not aim to glorify mistresses.

She also disclosed that the Pinoy Big Brother Teen Edition 1 winner will be shooting in Cebu, Kim's hometown.

In the movie, Kim plays a lounge singer in Cebu who will be brought by her partner to live in Manila.

Kris narrated, “In this movie, I teach her how to become a mistress.

“Pero as a backgrounder, you are actually a lounge singer in Cebu..."

Etiquette for Mistresses is scheduled to be shown in theaters this 2015.

Kim is also doing a teleserye with Xian Lim titled The Story of Us.