Paul Bettany tells Filipinos: "You’ve all seen me naked. Therefore, you have me at a disadvantage." 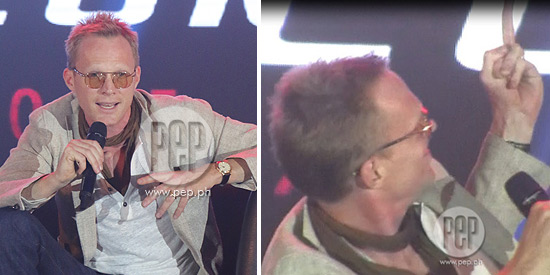 During his Manila visit, Paul Bettany flashed the dirty finger when he recalled how a producer told him that his career was over. The British actor says he, Robert Downey Jr., and Chris Evans have improvised jokes in Captain America 3: Civil War.

It was a hot day when Hollywood star Paul Bettany was flown in by helicopter to the World Trade Center in Pasay City, Philippines.

The British actor had a public panel (including a Q&A portion with fans) during the 2015 AsiaPOP Comic Convention, which is ongoing until this Sunday, September 20, at the World Trade Center.

The extremely talented, if underrated, actor talked about being in character for the Avengers franchise—first, as the voice of Ironman's artificial intelligence system JARVIS and now as Vision in Age of Ultron.

Paul also spoke about how it is being part of a cult classic that has been running for several years and for more years in the foreseeable future, and the many things he can and cannot talk about (lest he is attacked by Marvel agents!).

Here are excerpts from “In Conversation with Paul Bettany” at the 1st AsiaPOP Comic Con held in Manila:

Host: They’re giddy at the sight of you. But also because we just saw a little bit of [Captain America] Civil War. Could you talk to us a little bit about what it was like putting that together and the difference between making that and the Avengers movie?

Paul Bettany: In that, I got a little bit more used to the costume, which was uh—uh--- (laughs) it was a lot of work! We all had a bit more fun. You know, there were more improvised jokes between me and [Robert] Downey Jr., and me and Chris Evans, and it was a really loose atmosphere on-set. It was one really loose set, it was great!

Host: One of the things I always read about when I try to research about these Marvel movies, especially these Avenger movies, is that, it’s ironic, for some of the most successful movies we’ve seen in the last few decades, they also say the exact same thing: it’s one of the most fun, most happy, most loose filming environment. I was thinking to myself: well, that’s a little too good to be true. But it seems like it is!

Paul Bettany: It’s true. I would totally lie to you if it wasn’t, but I don’t have to lie. And we all get on. They’re all a really nice bunch of boys and girls. They’re all happy to be there. They’re being terribly well-paid, so they should be happy to be there. And work’s really creative and fun, you know? I got to be born on camera, you know, that’s unlikely to ever happen again.

Host: Jeremy Renner [who plays Hawkeye], though, has kind of got the better end of the stick here because he doesn’t have to put on anything extensive...he could go to the hardware store wearing that. So that’s a little unfair for him.

Paul Bettany: It’s true… [I have to endure] two-hour makeup.

Host: We’ll obviously get to more Civil War and Marvel stuff in a little bit. But you have a lot of fans here in the Philippines before all the Marvel stuff because of all the great work that you’ve done. You know, backstage, we were talking a little bit about Wimbledon, which was a movie that you did. It was of great use for me because I got to teach my sister tennis because of it. Do you still pick up a racket every now and then?

Paul Bettany: Yeah, I learned to play tennis for that movie. And it was so frustrating that on the last day I broke all of my tennis rackets. But, yeah, I’m back to playing a little tennis every now and again.

Host: If you’re an Avenger, you gotta stay in shape. Is there—because everyone always talks about that—[Robert] Downey Jr., he’s still talking about how he’s in such great shape because of having to play the character in the movie. Have you changed your lifestyle you find a little bit?

Paul Bettany: I LOVE potatoes! I just DREAM of potatoes.

Host: You should try Filipino rice. You might find that--

Paul Bettany: I dream of rice!

Host: We’ll treat you to some good food.

Another movie, I’m sure we’ll get a roar from the crowd when I mention it in a little bit, another movie you did before that has a great, special place in the hearts of many of your fans is A Knight’s Tale. (fans scream wildly)

I know that you’ve spoken about it in interviews before as very significant and has a special place in your heart because of what it meant to you in your career. When was the last time you saw it again? Do you do that? Are you that kind of actor? Do you re-watch a lot of your old stuff?

Paul Bettany: I’m not sure I’ve ever seen that one. But you all have, which means that you’ve all seen me naked. (crowd cheers) Therefore, you have me at a disadvantage.


Host: About the Avengers movie, does your performance get the same kind of love and appreciation and fan moments with the kids, with the family, your parents, when you come back home? Are they as big fans of it? Or are they like: “Oh yeah, Paul, you were in another movie. Okay, let’s move on.”

Paul Bettany: The Marvel stuff is the only things I’ve been in that my kids have been interested in. So that’s slightly humiliating. My 4-year-old daughter is in love with Robert Downey Jr. And I was trying to get her to send a video message that said: “I love the Vision more than you” and send it to him. But instead, I had to send him one where she says: “I love you, I love you! I love you more than my daddy!” (people laugh) It was a very bad and dark moment for me.

It must be great though—and I know you love making all sorts of movies—but I’m sure this has a special place in your heart, you’re making something that not only has a lot of commercial success, but something that your children not only wanna watch but can’t wait to watch, really curious about. That must be an experience.

Paul Bettany: Yeah, it’s really great. And also, as an actor, the other part of it is knowing that you have work in a year’s time. I’ve never had that. Do Jarvis, you should do Jarvis. No, find somebody else. Oh, I … It’s the first time in my life that I’ve had the security of knowing that I’ve got a couple of movies to make…

Nikko: Do we have a number specifically?

Paul Bettany: Every time I begin to reveal something, I see a red dot here on my shirt. The Marvel agents are everywhere.

PAUL FLASHES DIRTY FINGER. The host then opened the floor to questions from Filipinos.

Fan: I was wondering what was your research process was like coming into the movie. Were you a fan of the comics? Were you vaguely familiar with the character? Or did you just delve into the role?

Paul Bettany: I was sitting on the sidewalk of Sunset Boulevard having just come out of a meeting in the building behind me, having been told that my career is over by a producer. And my phone rang, and I answered my phone, and I said: “Hello.” It was Joss Whedon. And Joss Whedon said: “Do you want to be a superhero in the next Avengers movie?” I went: “YES!”

(At this point, he turns around and, with his back to the audience, flashes his middle finger in the opposite direction)

Paul Bettany: That’s a true story. And you know, with people like Joss, people like Jeremy Latcham, people like Kevin Feige, you’re working with “the professors” of these comics, these stories. They know them intimately and when they bend the rules, people trust them. They have grown up as fans themselves and are essentially continuing that in their grownup, adult lives. What is extraordinary, I think, about the pictures is you feel they’re made by fans. You feel that they’re made by people that love the stories and aren’t just trying to squeeze another buck out of it. They really care deeply about the quality of the material. So I was surrounded by lots of people that I could ask questions from.

Fan: Congratulations, by the way, to England for winning the opening match of the Rugby World Cup! My question is: you played Silas [in The Da Vinci Code], which was a very dark character; Geoffrey Chaucer [in A Knight’s Tale], who was comedic and medieval; Wimbledon, which was pretty much mainstream, and now you’re with the Avengers. Have you played your dream role? Is there a role out there you’re still waiting for and asking for?

Paul Bettany: I don’t have a dream role, I just love great writing. When I read great writing, I fall in love with it. I never have a plan in that way. I’m also a natural blond and an actor, so I tend to be bad at making plans anyway. So no, it doesn’t really work like that for me, you know? But thank you for the question.

Fan: What is your favorite role so far?

Paul Bettany: I don’t know… I love all of them. I’m really proud of each movie I make. There are some darker characters that I played early on in Gangster No. 1. I play around with that…I think I take bits and pieces and carry them with me.

Fan: What kind of preparation did you go through to get into the head space of Vision. Did you read comics? Did Joss Whedon tell you: ‘Here, read this?’

Paul Bettany: I was given comics. I also was looking to think about what could be edifying for me to learn. I took the opportunity—you see my character get born… something unlikely to ever happen to me again. He must be both omnipotent and yet totally naive at the same time. And experiencing the world in real time and his place in it. Is he going to be a force of good or a force of evil? It was really interesting, fun to play with, because he’s dangerous, you don’t know if he’s going to go one way or another. I’m continuing that theme in Captain America 3.

(To view photos of his Philippine visit, click: Hollywood actor Paul Bettany flashed his middle finger during Comicon in Manila)


(To learn more about the AsiaPOP Comic Convention ongoing until September 20, CLICK HERE)