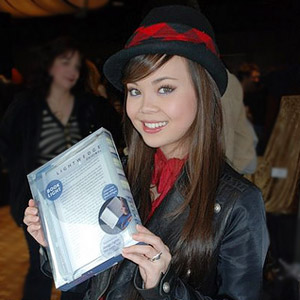 She plays "villainess" Ashley Dewitt in Hannah Montana, one of the msot popular teen shows in the United States. And she happens to be an adorable Pinay. Her name: Anna Maria Perez de Tagle.

In an interview aired on Kapuso Mo, Jessica Soho last January 31, Anna Maria disclosed that her parents are full-blooded Filipinos. Born in the United States in 1990, Ana Maria made her first trip to the Philippines at a tender age of two. She and the family currently reside in Los Angeles, California and frequently visit Manila. One relative who is very close to her heart is her Lola Jing Pichay.

Acting is definitely in her blood. Aside from having a famous grandmother, Anna's father, Archie Perez de Tagle, is a retired Philippine actor and former TV host. Her mother is Evelyn Enriquez.

Anna then impressed Jessica by singing a few lines of the popular song "Ikaw." The GMA-7 TV host asked her, "How does it feel to make it here in Hollywood?"

"I am so honored and blessed to be where I am today," was Anna Maria's warm and sincere reply. Her unique musical artistry coupled with her sweet personality opened doors for her in Hollywood.

Anna considers world-class Filipino performer Lea Salonga as her idol. She points out that Lea has a "unique and has a flawless voice," which is why Anna wants to be like her.

Being able to penetrate Hollywood gave her opportunities to meet and interact with a lot of popular celebrities like teen star Miley Cyrus and the Jonas Brothers—all of whom she considers as friends. She says of the female Hollywood teen star: "Miley Cyrus is so amazing. She's a big ball of energy."

How about the Jonas Brothers? She says with a smile: "They're hot. They're all cute, gentlemen. Nick is cute. Kevin is adorable and Joe is hot...they're all like my brothers."

Anna Maria played the character of Ella in the 2008 Disney Channel Original Movie Camp Rock and reports say a sequel is in the pipeline.

Web reports say that Anna will soon star in Fame, an updated version of the 1980 musical. The film revolves around students of the New York Academy of Performing Arts. Kevin Tantroin will direct this movie, which requires cast members to be a quadruple threat: act, sing, dance, and play an instrument.

Anna Maria will portray Joy in this film where she will be joined by Kay Panabaker and Asher Book. The movie is scheduled to be released by Lakeshore Entertainment by September 2009.