Manny Pangilinan on TV5: “I can confirm that we are still number 3.” 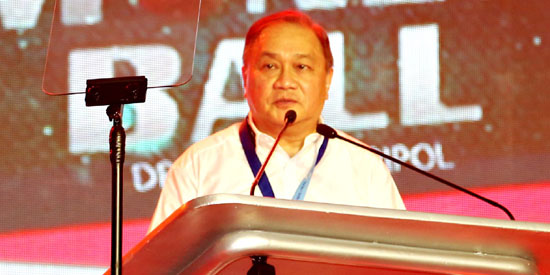 “We’re still trying our best to find our place in the sun na muna,” says Manny V. Pangilinan about the position of TV5 among major TV networks in the Philippines.

TV5 still holds the third spot among major TV networks in the Philippines.

“We’re still trying our best to find our place in the sun na muna,” TV5 Chairman Manny V. Pangilinan said briefly when PEP.ph (Philippine Entertainment Portal) asked him what TV5 is doing to keep up with other TV stations.

MVP was present during the TV5-sponsored dinner at the recently concluded AD Summit Pilipinas 2014 at the Subic Bay Exhibition and Convention Center in Subic, Zambales.

Other homegrown talents such as Eula Caballero, Ritz Azul, Vin Abrenica, Benjo Leoncio, and Mark Neumann were also present at the event.

In his short speech prior to the program, MVP told selected members of the media and advertising delegates that TV5 is still in third place among TV networks.

He recalled, “The last time I spoke to the advertising community was a little over two years ago, in 2011.

“I said then that while [ABS-CBN] and GMA were quarrelling over who’s number 1, TV5 was clearly the undisputed number 3 in the industry.

“Today, I can confirm that we are still number 3.”

Read: Manny Pangilinan sees TV5 at the helm of digital media revolution in the Philippines

CONVERGENCE NOW. Instead of joining the network war, TV5 is focused on strengthening its programming and improving its offerings to viewers by converging different media platforms.

MVP mentioned in his speech the importance of the 360-media experience and multi-screen platforms.

He related, “Not too long ago, we spoke in terms of PC, Internet, mobile phone penetration because they were separate and distinct then.

“Today, these lines are converging with the help of smartphones, laptops, tablets, phablets, and what have you—all powerful computers in your hands and connected to the Internet.”

The Chairman of TV5 also highlighted the effect of media and telecommunications convergence for better entertainment.

“Movies and TV series are now enjoyed on computers.

“Custom radio music is streamed onto mobile phones, and computers.”

The TV5 executive spiced up his speech by cracking jokes using techie terms and even recent trending topics such as #SaHabaNgPilaSaMRT, #IPushNaYan, and “Totes Amaze,” which is used as the tagline for PLDT Home TVolution.

MVP is also the chairman of the Philippine Long Distance Telephone (PLDT) Company.

RIGHT TEAM. MVP acknowledged in his speech the people who are working with him to achieve the network’s goal.

MVP pointed out, “We brought these people in because it is my belief that in the face of challenges we wrestle within the industry today, the solution lies not so much in technology or resources or even funding—but in having the right people, the right team in place to navigate through the rough seas.”