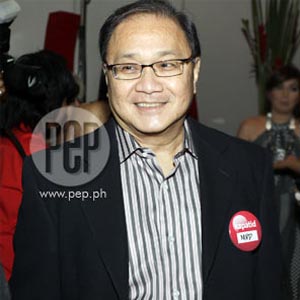 TV5 owner Manuel "Manny" V. Pangilinan admitted in his AdCongress22 speech Friday that, compared to ABS-CBN and GMA-7, TV5 is a mere third. However, he sees TV5 collaborating with his other businesses to create an all-encompassing media provider for Filipinos. Citing U.S. websites Netflix, Hulu, and Amazon as his pegs, Pangilinan said TV5 could become not just a media content provider, but a dynamic digital leader.

"It's the end of the world as we know it," said Manuel "Manny" V. Pangilinan, quoting a song by the rock band R.E.M.

This was held a day after TV5 hosted a grand party for media and advertising delegates.

MVP'S SPEECH. After quoting a line from a song by R.E.M., the TV5 owner said on Friday that the Philippine media are on their way to bigger changes in the future.

He sees TV5 collaborating with his other businesses to create an all-encompassing media provider for Filipinos.

Citing U.S. websites Netflix, Hulu, and Amazon as his pegs, Pangilinan said TV5 could become not just a media content provider, but more of a dynamic digital leader.

Following is the full transcription of Pangilinan's 15-minute speech on the Ad Congress theme, "Change the Game":

"I thought telecommunications was a difficult business until I got involved with television. I used to sleep five hours before, usually after a late game of badminton. Now with TV5, I have become a certified insomniac.

"Earlier I was telling Sandy [Prieto-Romualdez, Ad Congress Chairwoman] that neither Channel 2 nor Channel 7 should worry about us because we are clearly the undisputed Number 3. However, just thinking of being stuck in third place has made me extremely paranoid. Television is dangerous to your health.

"Well it's nearly 2012 and if the Mayans are to be believed, we should all be quitting our jobs to prepare for Doomsday. But seriously, something excites me about 2012 and this song "It's The End Of The World as we know it" by the rock band R.E.M. readily comes to mind.

"The music video was broadcast by TV stations across the U.S. on the 12th of June 2009 as they signed off on their last analog broadcast completing the switch to digital as required by federal law. I feel that we stand here today at a very similar precipice—one not designed by law but compelled by a rapidly shifting landscape.

"Let me share you a story today. Please think of it as a storyline for a narrative advertisement.

"Here's Christine, a typical young city girl. She's 22, fresh out of college, works as a copywriter in an ad agency and still lives with her parents. The first thing Christine does when she awakens is, of course, open her Facebook. She quickly changes her status to 'I got a feeling tonight's gonna be a good night.'

"Her friends know it's directed at someone but they 'like' it anyway. She also decides to put an end to the long-running Twitter thread about Pacquiao-Marquez part three. Then she joins her parents for breakfast, and when her dad reads the Inquirer and the Star, Christine gets the news first from her Facebook and Twitter. Meanwhile, her mom is scanning through the latest issue of Marie Claire, downloaded by Christine on the iPad via Zinio.

"Then, the MRT and her iPod take Christine to work and her playlist for today is the Black Eyed Peas. [And then] at 9AM she checks in at her office on Foursquare. She's now ready to spend the next eight hours of her day in a cubicle, her only connection to the outside world being a computer and her Smart Netphone.

"Opening her Facebook page first, she checks if her boyfriend Marco has commented on her status, kahit like man lang. Nothing. It's been three hours since she posted so she worries. In her mind he's spending too much time with her rival for his affections, something called Call Of Duty version three. She looks up ClickTheCity for her movie date after work, now she's watching the trailer on YouTube on her Smart phone—the link she got from Philmug—and again she shares it over to Facebook.

"Then her phone awakes, broadcasting Marco's special ringtone. He has seen the movie trailer and now his passion for Call of Duty now replaced by a stronger instinct and so he texts Christine, 'Excited. See you later.'

"So that's Christine not of the past, but the present and the future. And that's our market today and of the future.

"Indeed the Internet has become a true medium for the masses, an important tool for democratizing because of its openness, its publicness, and ease and speed of communication. Sometimes it tests and stretches the limits of such concepts as free speech and strikes fear amongst the ruling elite, just as Egypt's Hosni Mubarak.

"The speed and convenience by which the medium spreads the message virally can be frightening especially if that speed were collared or heightened by emotion. I should know. Remember my commencement speech at the Ateneo? Maybe graduation speeches can also be, to borrow a phrase, 'toxic to your health.'"

*Note: Pangilinan then goes on to remark, "Mabuti na yung malinaw, walang plagiarism," referring to his controversial speech during the commencement exercise at the Ateneo de Manila University on March 27, 2010. (CLICK HERE to read related article)

"How technology changes our habits: Today as you hold your qwerty phones, is there anyone here still adept to texting with only one thumb? I am... in perfect Jejemon. But I say, bilang na bilang na ang araw na nagbibilang tayo ng 160-character text.

"Yes, SMS will slowly be overtaken by over-the-top messaging on your BBM, Android's Google chat, iMessage amongst others. Eventually, Smart and PLDT would provide access to your phone on the cloud—voice, text, contacts, content, everything on the cloud. So when you think about it, this could mean the end of roaming and the end of your physical SIM cards. So I guess, I can tell you, 'Go and SIM no more.'

"Indeed we're looking at the future in many places, already the present, where the consumer is empowered with the choice of when, where, and how he or she wishes to receive content. Linear, network-dictated schedules are out. User-managed content is in, received on a range of digital devices other than the static TV set in your living room. We want content to follow the user everywhere on demand, just as e-mail now follows you everywhere.

"Primetime is out, anytime is in. For example, Netflix and Hulu provide movies and TV shows in the U.S. supplied by traditional content producers like ABC, CBS, NBC, and FOX available on demand anytime, anywhere. These game changes result from three forces. First, consumers want online video programming not dictated by traditional TV programming. Second, film and TV producers agree to place their content on the cloud. And third, video and audio piracy can be curtailed. If content is king, it is time to say that consumer choice is queen.

"Content producers of any sort can feed into our 360-degree platforms, represented by our diverse and extensive delivery networks, and our last mile access to all sorts of consumers in all kinds of situations—be it toll ways offices, homes, even hospital beds.

"Quite recently, Sun Cellular became our 'One and Unli.' Our investment in Digitel and Sun has changed our networks and expanded our reach. We now have 64 million eyeballs (representing cellular subscribers), 3 million broadband users, and 2.5 million fix line customers. This reach is augmented by Meralco's 5 million households, and Maynilad's 1 million households aggregating 30 million people.

"Now think about this, when the Philippine equivalent of Netflix does happen, can our Meralco and Maynilad customers pay for their pay-per-view purchases of TV shows and movies on their Meralco or Maynilad bills? In the same manner that Amazon or Netflix personalizes its offers, promos, and their media messaging to its customers, can we match the profile of our customers with your advertising better?

"But the impact of the Internet goes beyond the empowerment of the consumer. This brings me to my second game-changer: the empowerment of content generators. Today, armed with multimedia devices, most anyone can create content and upload it directly to the Net. You can be producers, directors, actors, citizen journalists, and marketers yourselves.

"Content generators can go straight to the consumers via the net, and the consumers in turn can feedback the content producers directly and instantly. This means CDs and DVDs—which are simply [inter-medial] devices for audio-video material—will give way eventually to more direct linkages between signers and composer with their listeners; actors and actresses, scriptwriters and directors with their viewers. Eventually with encryption, piracy can be controlled, intellectual property rights protected, and royalties to content-makers ensured.

"So not to mince words, the Internet will make content creation no longer the province of TV stations, film studios, or music labels. The Internet will eventually democratize not only consumer choice but also content generation.

"Which brings me to the third game-changer, how advertising could adjust to the realities of future media as we see it. The Internet, as you know, has a counter showing the number of viewers which have logged on to a particular program and the actual number watching in real time. Can advertisers move quickly enough to increase or reduce their advertising depending on real time viewership? Can ad spots be priced according to the number of viewers recorded from time to time more accurately? Would this mean the death of ratings agencies? Would this also mean the end of premiums paid to primetime?

"The Net also provides geolocational data which advertisers could use for more precise targeting of their markets geographically. If advertisers can know the location of their viewers, advertising can be delivered to each such location depending, say, on the size of viewers in that location, preference, and purchase power. And ads can be priced accordingly including sachet pricing for short clips download.

"Finally, the format, messaging, and aesthetics of print, audio, and video ads are designed to address tastes and preferences of consumers to their most common denominator. Why can't the Net be used to design ads which are not shot guns, but are rifle shots targeted at specific customer profiles, maybe even armed with smart bullets, which can sub-direct themselves to desired customer clusters with the proper messaging?

"Well, it is time for me to close so let me conclude by saying that the test of effectiveness of any cataclysmic technological revolution must stress ultimately on how it enhances welfare—how it improves the lives of Filipinos.

"We think the best way to achieve this is by empowerment. The more we empower our citizens and content creators to make important decisions for themselves, not only about products and services they desire or develop but even about politics, the better.

"The word viral will someday be an advertisers' dream and a wayward politician's nightmare. Either way, it's proof positive about the growing power of the Net.

"It was not too long ago that PLDT and Smart ignited a revolution that has put the phone in every Filipino hands. Now we want to infuse an even richer experience into Filipino lives, empowering them to communicate, be informed, and entertained. The digital tsunami is coming so join me in bringing it. 'D2 na me.'

"Finally, in the face of all these cataclysmic challenges and changes, let me again recall what R.E.M. said, "It's the end of the world as we know it, and I feel fine." I think I just convinced myself to sleep longer tonight."